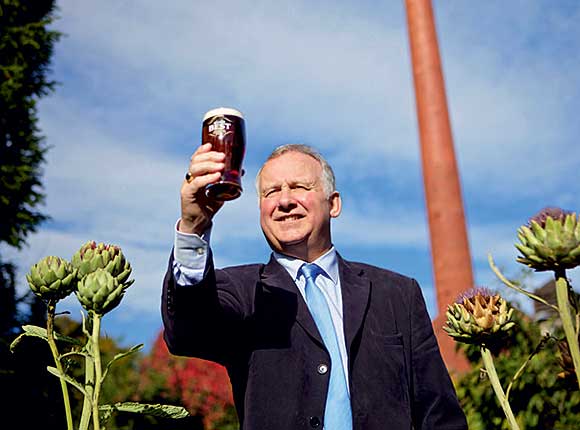 Belhaven Best is poised to reach the ripe old age of 21, having arguably exceeded all expectations since it first appeared in Scottish pubs in 1991.
One man who has had a box seat as Belhaven Best has evolved these past two decades is director of brewing George Howell, who joined the Dunbar-based brewery in 1992.
Speaking to SLTN over a pint of Best in Glasgow pub Rhoderick Dhu last month, he said the brand’s achievements are a source of pride for everyone who has been connected to Belhaven and current owner Greene King over the past two decades.
“Belhaven Best was born in late 1991 – that’s when it first came to market,” George said.
“I joined in April 1992, when the beer was still in its development stage, and became head brewer later that year.
“Since then the product, which I’m very proud of, has grown year on year on year.
“At the moment it’s the top selling ale in Scotland, with 38% of the market, which shows that ale is still popular.
“Lager is arguably still dominant, but Belhaven has made its name in ale, albeit we do some lager.”
The Scottish brewing industry and the wider beer market have changed dramatically since the launch of Best, whose popularity is often put down to its ability to pack a punch much bigger than its 3.2% ABV might indicate.
Howell, a master brewer and qualified microbiologist, recalled with a degree of sadness the “demise” of major brewers in Scotland.
As a host of breweries operated by the likes of Tennent’s, Scottish & Newcastle and Lorimer and Clark have disappeared from the capital, he calculated that the Scottish industry now produces between three and a half and four million fewer barrels than when he first entered the industry around 40 years ago.
But there have been some changes for the better, he said, from technological advances that have improved beer quality and consistency to improvements in health and safety.
On the technical side, Belhaven adopted nitro keg technology (also used by Guinness) for Best when it was still in its infancy, and has harnessed the improvements that have steadily been made to the system since.
The brewhouse at Dunbar has also seen massive change in the way the equipment is cleaned (automated systems have long since replaced manual cleaning) and how the brewing process is monitored, with the brewer now able to view everything from flow rates, pressure and water levels at a glance on screen.
Such improvements are said to have greatly boosted the shelf-life and consistency of the product.
At the same time, the brewer’s job has become “less physical”.
“The Health & Safety Act came in 1974 and changed things for the better,” George explained.
“In the past, people would die from things like exposure to CO2. Manual handling has also gone; we used to carry huge sacks of hops and malt – now everything comes in 20kg bags maximum.
“The basic brewing process is still the same – it’s just more controlled and hygienic. Off-flavour beer is now a very rare event.”
There have been times of uncertainty during the lifetime of Best, though.
After the firm, then led by Stuart Ross, was floated on the stock exchange in 1996, it enjoyed impressive growth as a brewer, pub owner and drinks distributor over much of the next decade, so much so that it caught the eye of Greene King in 2005.
Doubts were expressed as to whether the new owner would retain a brewery in Scotland, and GK’s decision to close the bottling line at Dunbar in January 2010 (bottling now takes place at GK’s bigger, more efficient plant down south) would have done little to quieten that speculation.
But less than a year later Belhaven’s owner gave the go-ahead to commission a brand new brewhouse at Dunbar to the tune of £1 million.
“It was a significant investment during a recession, but the payback has been big in terms of cutting the over-time bill and increasing efficiency,” he said.
“We’ve increased capacity by 50% and can now meet our demands in five days.
“The closure of the bottling line was a difficult time, but it was the right business decision.”
As for the future, Howell said there was a commitment to continue supporting Best, pointing out that it (and other Belhaven beers) has started to grow south of the border through the GK pubs estate.
Beyond ensuring the quality of Best is kept up to scratch, he has also been handed a new product development agenda. So far that has yielded the development of a cask ale, Belhaven IPA, and new stout Belhaven Black, which he said has been deliberately brewed to be sweeter than Guinness.
“We’re still looking at new products – there’s a lot of competition out there,” he said. “Watch this space.”
Howell will also have a hand in developing brewery tours at Dunbar, where brewing is said to have taken place for 300 years.
“I get really angry when people call it a factory,” he added.
“The Belhaven brewery is a hidden gem. It’s beautiful.”

Image – George Howell pictured at the Belhaven brewery in Dunbar, East Lothian in late September. Howell described the brewery as a “hidden gem”.