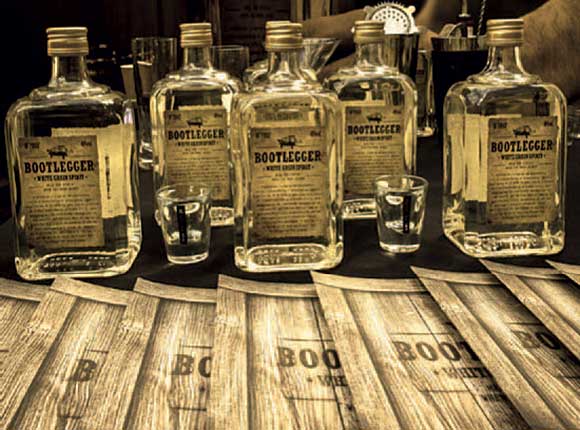 THIS month the Boutique Bar Show will bring a slice of prohibition to Scotland with the launch of Bootlegger.

A whiskey-style drink inspired by prohibition-era America, the product was officially launched at the Boutique Bar Show in London last month and is now being trialled in several London venues.
Aimed at young adult consumers, Bootlegger is a clear, un-aged grain spirit that is inspired by the liquids produced during the prohibition era. Launched by Dockyard Distillers, a subsidiary of Halewood International, it’s based on a blend of English and French wheat and is intended for consumption straight and un-chilled, or as an ingredient in cocktails.
“Bootlegger is targeted towards a younger ‘brand savvy’ audience than the traditional whiskey consumer, seeking to enjoy authentic straight talking spirits as part of their bar drinking repertoire,” said Richard Clark, at Halewood International.
Suggested Bootlegger cocktail serves include the Al Capone, which mixes Bootlegger with Grand Marnier, sugar syrup, bitters and a splash of Champagne.

Image – Bootlegger is described as a modern take on a drink typically drunk by 40+ drinkers.