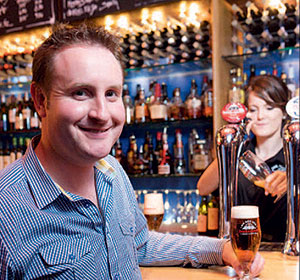 THE UK on-trade business of Innis & Gunn almost doubled in 2011 as turnover at the Edinburgh beer firm soared by 62% to £7.5 million.

The volume of Innis & Gunn beer sold in the domestic market rose 33% last year, with the value of sales up 38%, following what was said to have been a strong performance by its core range.
“The launch of Original Draught at the start of the year combined with strong packaged sales saw our on-trade business almost double in size,” said UK sales director Crawford Sinclair. “This expansion, combined with consistent growth in the off-trade, puts Innis & Gunn in a very strong position as we are able to meet the needs of the trade and the consumer going forward.”
Export markets continued to dominate sales, accounting for 77% of turnover and £5.7m of the value of sales. Canada remained its biggest market but the US was the “main growth catalyst”, with sales volumes up 178%.