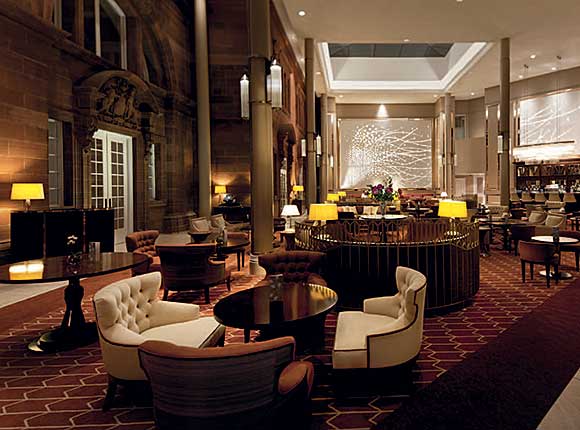 THE operator of Edinburgh’s famous Caledonian Hotel has drawn on celebrated times and places of hospitality history to inspire its multi-million pound refurbishment.

Unveiled to guests for the first time last month, the extensive renovations to the hotel’s bars, restaurants, rooms, spa and public spaces mark its addition to Hilton Worldwide’s Waldorf Astoria Hotels & Resorts stable.
The luxury makeover harks back to the glamorous past of the hotel, based at the west end of Princes Street, whose guests over the last century included Charlie Chaplin, Laurel and Hardy, Bing Crosby, Elizabeth Taylor and Sir Sean Connery.
The public spaces have been stripped back and designed to reflect its origins as a railway hotel: marble flooring, a sweeping staircase and a chandelier are said to provide touches of grandeur, with the railway theme referenced in items like luggage-inspired furniture.
At the heart of the public space is Peacock Alley, where efforts have been made to replicate the famous meeting area of the same name in New York’s Waldorf Astoria; here guests can order cocktails and afternoon tea.
Two brand new dining areas have been launched, marking the first culinary venture north of the border by Michelin-starred brothers Chris and Jeff Galvin. The Pompadour by Galvin offers classic French cuisine prepared using seasonal Scottish ingredients, as well as local favourites, while the informal Galvin Brasserie de Luxe “pays homage to the grand urban French bistros of Paris and Lyon”. The Caley Bar, meanwhile, has been refurbished as an “Edinburgh classic”, complete with drinks lists featuring classic cocktails, including the signature 1903.
Elsewhere in the hotel a new spa has been launched, with the refurbishment extending to its 241 bedrooms and meeting spaces too. John Vanderslice, global head of luxury and lifestyle brands for Hilton Worldwide, said the investment reflected the group’s commitment to grow its “one of a kind properties in a variety of leading destinations”.