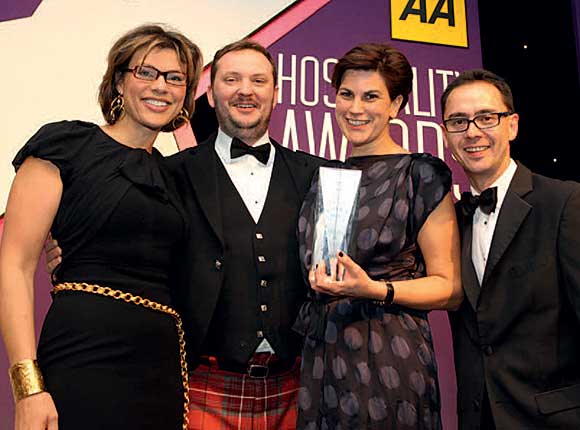 HOTEL and restaurant operators across Scotland were celebrating last month after picking up trophies at the AA Hospitality Awards 2012-2013.

The event, hosted at the Hilton Park Lane Hotel in London, rewarded some of the top outlets in the UK while also toasting 20 years of the AA Restaurant Guide.
Scottish winners on the evening included Highland hotel The Torridon, which was named Hotel of the Year for Scotland, and Glasgow restaurant Rogano, which took the title of Restaurant of the Year for Scotland.
The Torridon’s Rohaise Rose-Bristow said the team at the 19-bedroom hotel was “hugely honoured” by the award win.
“It is a fantastic achievement that reinforces our belief that working as a team is vital and that everyone has an important part to play in delivering the best overall customer experience,” she said.
“It is also extra special to us as we celebrate our 20th anniversary this year.”
Rogano, first opened in 1935 and now owned by Lynnet Leisure, was praised for its mixture of quality seafood, classic dishes and local cuisine.
“I am delighted that what we have achieved in Rogano over the years has been so greatly acknowledged by this award,” said Lynnet chief James Mortimer.
“The Rogano is, always has been and always will be the place to visit in Glasgow.”
Another Glasgow venue, West, was named Pub of the Year for Scotland, while Edinburgh fine dining restaurant Castle Terrace won the Wine Award for Scotland trophy.
“Winning the AA Wine Award, Scotland, is a great achievement and a tremendous compliment to the entire team, particularly sommelier Joel and Philippe Nublat for their continued dedication and passion for fine food and wine,” said the restaurant’s chef patron, Dominic Jack.
West owner Petra Wetzel said the team was “thrilled” with the pub award.
“This award further strengthens our confidence that our dedication to quality food and drink and outstanding service sets us apart from our peers in the industry,” she said.
As well as the award winners, the event also revealed the new recipients of AA Rosettes.
Among the Scottish recipients were One Devonshire Gardens in Glasgow, Gordon’s in Inverkeilor and Rocca Bar & Grill in St Andrews, all of which were awarded three rosettes.
“This prestigious award puts us in the top 10% of restaurants in the UK today and proves the passion, hard work and enthusiasm of the whole team,” said Susan Pieraccini, co-owner of Rocca Bar & Grill at Macdonald Rusacks Hotel.

It is a fantastic achievement that reinforces our belief in working as a team.

“Our third AA Rosette sets us apart and makes us different to other restaurants.
“We’re immensely proud of this achievement.”
Other Scottish restaurants to receive three AA Rosettes included Cringletie House in Peebles, The James Miller Room at Turnberry, Airds Hotel and Restaurant in Port Appin and the Isle of Eriska Hotel.