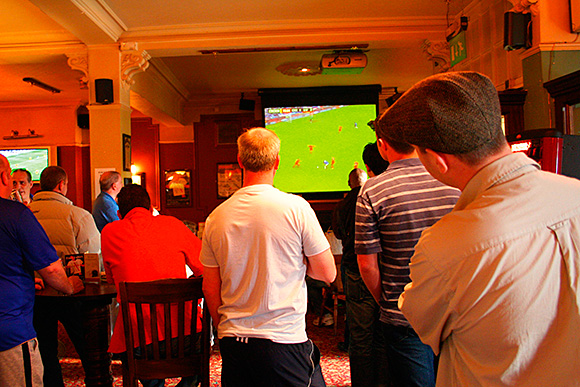 TOP flight football is expected to boost the UK’s pub trade to the tune of £30 million each match day this season, a new report has claimed.

More than two thirds (68%) of football fans said they will go to their local pub to watch their team in action this season, according to independent research commissioned by Sky and Molson Coors, with a quarter saying they will do so at least once a week.
Nearly a third (32%) of football fans go to the pub just to watch sport, according to the poll, with 23% visiting a minimum of once every seven days.
When watching football in the pub, 64% said they drink beer and have an average of just over three drinks per visit; nearly a quarter take their wives or girlfriends with them.
The broadcaster and brewer, which joined forces in June to offer on-trade discounts on live sport and a price freeze on Molson Coors beer, said the findings are welcome news for operators as licensed premises could potentially see a £30.2m boost in takings from sports viewers in just one day of sport; separate research conducted for BSkyB estimated that last season’s Manchester derby attracted 1.7 million viewers to pubs and bars across Britain.
Simon Cox, of Molson Coors, said football is “good news for publicans”.
“Our research has shown over a third of football fans visit the pub for the atmosphere, which combined with 26% visiting to socialise with friends, makes the pub the perfect place to watch your team this season,” he said.
David Rey, managing director of Sky Business, said the broadcaster is working with Molson Coors to encourage more people to watch football in their local pub.
The research also identified the pub habits of different sports fans.
More than two thirds of rugby union fans said they visit the pub, with a further 70% saying they drink beer when there, consuming an average of three drinks per visit.
Golf fans also seem to like the pub, with 65% visiting and 37% doing so more than once a week to watch sport in general, consuming on average 2.6 drinks per visit.
Just over half of tennis fans (51%) said their primary reason for visiting the pub was for food, with 31% choosing to drink red or white wine.
Boxing fans are the biggest drinkers, according to the survey – 32% have five or more drinks per visit, and a quarter of those polled said cider is their favourite drink when they visit the pub. Darts fans are a sociable bunch –95% use the pub to catch up with friends, consuming an average of 3.6 drinks per visit, the poll found.

Image: More than two thirds of football fans said they will go to the pub to watch a game.