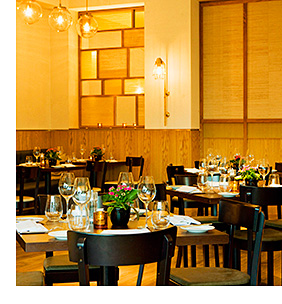 HILTON Glasgow is set to launch three new bar and restaurant areas as part of a multi-million pound revamp of the hotel.

Connich Bar, Morblas restaurant and Ti tea lounge will be unveiled as the hotel prepares to celebrate 20 years in the city later this year.
The first to launch is Connich Bar, which means ‘to encounter’ in Gaelic. Created by Central Design Studio, the new-look ground floor bar has an orange and muted grey colour scheme and is described as a modern, relaxing and welcoming space furnished with oversized armchairs and banquette seating. Connich will serve a range of wines and beers, premium spirits, Champagnes and Prosecco, as well as an extensive list of malt whiskies. Its cocktail list will feature classic, Champagne, signature and ‘calorie conscious’ cocktails.
Following the launch of Connich Bar, Hilton Glasgow will unveil its revamped restaurant Morblas, whose name is derived from the Gaelic words for ‘great’ and ‘taste’. The restaurant will cater for all palates, offering “fresh starters, hearty main courses and grills” as well as an extensive dessert menu.
The new afternoon tea lounge, Ti, whose name is also Gaelic, is described as a “modern, fashionable and cosmopolitan companion to Connich Bar”.