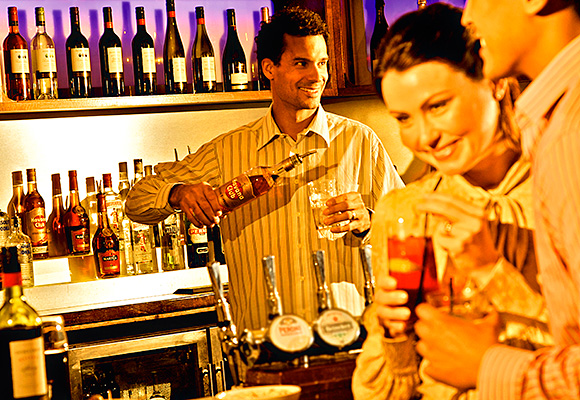 AS a category that has found favour with bartenders in recent years, rum has seen no shortage of activity – particularly at the golden and spiced end of the category – with new variants introduced and established brands revamped.

The activity is credited with maintaining the category’s buoyancy – and offering consumers plenty of brands and styles to choose from.
In such a burgeoning category, it seems balance is the watchword for operators deciding what to stock on the gantry. Drinks firms contacted by SLTN last week advised operators to ensure their range spans different styles of rum.
“Like all spirits on the bar it is important to make sure you have a good balanced range to offer customers,” said Alex Turner, head of brand advocacy for Bacardi.
“However, it is important to ensure they are being used and not just taking up space.
“There are a number of ways to compile a rum range; most bars will compile the list based on style or country of origin. For example, white, golden, dark or navy-style and spiced is probably the most basic way of compiling the list, and ideally to have some choice within each of the styles (two white, three gold, two dark/navy and two spiced).”
EmmaLi Stenhouse, Sailor Jerry brand ambassador at distributor First Drinks, also advised operators to stock a range of styles, saying consumers’ tastes when it comes to drinks are “more sophisticated than ever before”.
“I’ve seen a shift in the on-trade to bars having a selection of spiced rums rather than just one,” she said.
“Increasingly, bars are realising that the different styles and flavour profiles can sit side by side and fulfil different needs.”
Drinks giant Diageo, which owns the Captain Morgan’s Spiced brand, said offering rum-based long drinks and cocktails can help operators set their outlet apart from the competition – and give consumers an experience they’re unlikely to achieve at home.
But Andrew Leat, senior category development manager for the on-trade at Diageo GB, said licensees must choose which rums to stock carefully.
“Golden rum is a relatively new category to both consumers and operators,” he said.
“If licensees are not sure about the best products to stock in this category it can be tempting to offer a very wide range. Doing so without giving any guidance on which to choose can leave consumers confused and make them more likely to opt for a familiar drink.
“In order to avoid this, Diageo GB advises licensees to stock one market-leading golden rum brand and one more premium brand. This ensures consumers aren’t confused, but will provide bar staff with the opportunity to ‘up-sell’ to a product that has a higher margin.”
The opportunity to ‘up-sell’ was also highlighted by Havana Club owner Pernod Ricard.
Ian Peart, the firm’s on-trade channel director for spirits, said the growth in “ultra-premium” rum is being driven by bartenders and consumers seeking “authentic products with distinctive taste and provenance”.
“Consumers are always looking for more exciting and unusual drinks to try; similarly, bartenders are always looking to push the boundaries and are demanding more interesting and dynamic flavours,” he said.
“As a result, cocktails continue to perform well in the on-trade; it is important for on-trade operators to capitalise on the demand for cocktails by stocking popular brands that consumers know and trust, including premium rum such as Havana Club in order to make simple cocktails such as the Cuba Libre.”
Halewood International, whose rum brands include Lamb’s Navy and Lamb’s Spiced, also credited cocktails with helping boost sales of the spirit in pubs and bars.
“Halewood International has seen evidence to suggest consumers are experimenting with new, niche products, and this tends to be with golden and spiced rums rather than within the white and dark rum categories,” said James Wright, international sales and marketing manager for Lamb’s.
Scott McKenzie, of Marblehead Brand Development, which distributes dark spiced rum The Kraken, agreed that the spiced rum sector is especially buoyant at the moment.
“I think the Mojito has opened up the rum category to consumers and is helping them to experiment away from white to golden, aged and spiced; and to ask questions about aged rums and understand the profile of spiced rums,” he said.
It’s a view shared by Gosling’s distributor Love Drinks, which said consumers’ tastes are progressing through the different rum sectors.
“Gosling’s range of rums is shaking up the dark rum category – all of them are aged for a start and range from the Black Seal Rum to the Family Reserve Old Rum,” said the firm’s Emily Williamson. “The former is a great cocktail ingredient and the latter sits, unusually for a dark rum, in the sipping category.”
Tom Hurst of LWC Drinks, which distributes Old J spiced rum, said he expects to see further growth across the golden and spiced rum sectors.
“Due to its accessible taste and price profile I believe Old J will prove to be a good entry point to the rum category as a whole,” he said.