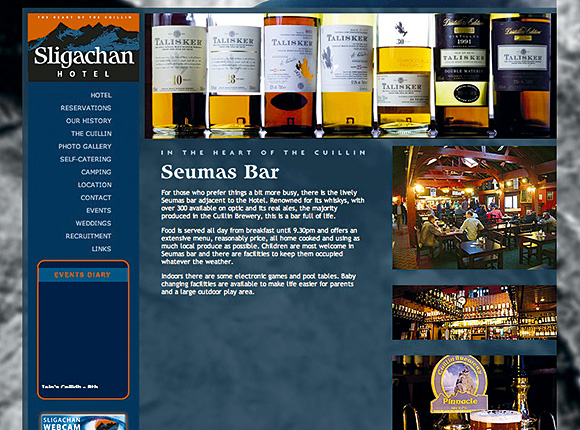 THE owners of an Isle of Skye pub have two reasons to celebrate after winning a national award as they prepare to mark a landmark anniversary.

The Sligachan Hotel has been named whisky pub of the year in The Good Pub Guide 2013 thanks to the array of 350 whiskies in its Seumas Bar.
It’s the second time the hotel has won the accolade, having previously been successful in 2011.
But the latest is all the more sweet as next year marks the Campbell family’s 100th as owners of the hotel.
The Sligachan, which sits at the foot of the Cuillin mountain range, has been a sanctuary for mountaineers, walkers and tourists for 180 years.
In 1913 it was taken over by John Campbell, great uncle of current owner Fiona Coghill who runs the hotel with husband Sandy and family.
“Next year we are celebrating the fact the hotel has been in my wife’s family for 100 years, so it’s quite nice that this award has come along,” said Sandy.
“It gives us another reason to celebrate.”
The Sligachan is one of 16 pubs across the UK to win an award in the latest Good Pub Guide, with The Cock in Hemingford Grey, Cambridgeshire, winning the ultimate Pub of the Year title.
The latest edition of the “bible for pub-goers” includes reviews of 4700 establishments, 252 of which are new entries, as well as contact details, descriptions and opening hours.
Inclusion in the annual guide is welcomed by pubs and the fact the selection process is informed by the views of customers adds to its credibility.
“From our perspective it’s all the more pleasing because it’s people who appreciate what you’ve got who generate the award,” Sandy added.
“We’ve got a big bar with about 80 or 90 malts on the optic and most of the 350 varieties are visible.
“Some pubs have tonnes of bottles of whisky but they are amalgamated on a shelf whereas, because of the size of the bar here, we are able to display most of the whisky. That generates a lot of interest.
“We get a lot of people taking photographs and coach parties of people who aren’t actually staying at the hotel calling in and having a coffee or a few drams.
“When I was in my early 20s I didn’t know a lot about malt whiskies but we’re finding that a lot of people actually do appreciate and know a little bit about it.
“I’d say it’s the one sector in the drinks industry that is still relatively buoyant.”

Image – The whisky range at The Sligachan’s Seumas Bar is said to be a big talking point.