With stunning views of the Firth of Clyde, the new glass-fronted restaurant at Seamill Hydro makes the most of its location, as Gillian McKenzie reports 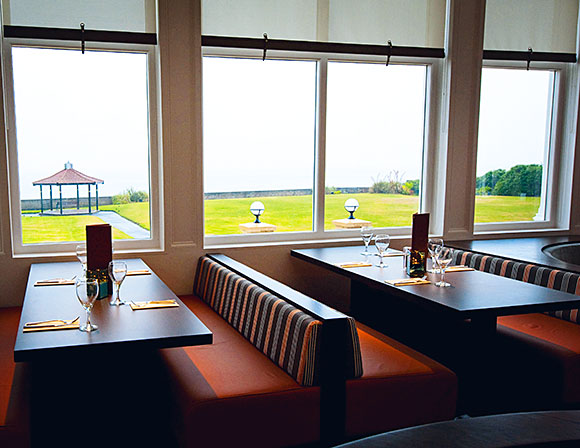 SET on the dramatic Ayrshire coastline, looking out to the Isle of Arran and Ailsa Craig, Seamill Hydro’s location has always been a major selling point of the hotel.

And it was this view of more than 100 square miles of land and sea that inspired the latest addition to the venue.
The Seamill property began life in 1879, like the other hydros of the Victorian era, as a sanatorium, promising guests relief from rheumatism and other conditions by bathing in waters from its own spring.
More recently the Hydro has been developed by the Sweeney family over the past 26 years from a 40-bedroom hotel into a 94-room resort and spa.
The latest stage of its evolution has seen the restaurant enlarged and relocated to the front of the property, overlooking the sea.
On paper, the project seemed pretty straightforward, with the family having earmarked an existing bistro, games room and private dining space at the front for the new eatery.
But an extension was needed to achieve the additional space.
As hotel development manager George Jones told SLTN last week, it was one of several challenges the project brought.
Having been refused funding by their own bank, the business switched to Santander, where a £3 million refinancing package was agreed through Christie Finance.
The next job was to build the glass-fronted extension – designed by architects Thompson MacLeod – which ultimately inspired the restaurant’s name, The Orangery, onto the front of the Victorian property.
George said it was one part of the project which had to be completed inside a tight time frame.
“We had a big Christmas festival last year and we then had a three-month window before the wedding season began,” he explained.
“Our reputation for weddings is so important to the business and we didn’t want to jeopardise that so the building work started on January 8 and the external work had to be finished in time for the first wedding.
“Within that three-month window we had to do demolition work, build the metal frame, put in extra drainage and build the exterior so that the outside was completed.
“There were a lot of challenges – it’s a Victorian building and some of the walls are two metres thick in places; and there were massive structural changes to accommodate the size of restaurant.
“A new kitchen was installed, which throws up more challenges in a Victorian building because you’ve got to think about where you can extract to, where you can get gas in, and so on. There was a lot to do.
“We were lucky because we didn’t lose many days to the weather and the exterior works were complete for the first wedding.”
With the outside works complete, attention shifted to the interior of the 140-cover Orangery.
The restaurant’s location at the front meant it could be sealed off during the refurbishment, minimising the impact on the hotel’s guests.
With co-owner Sylvester Sweeney, who has overseen developments at the hotel for the past 15 years, project managing, the work was arranged to fit around the hotel’s day-to-day operations, with guests accommodated in lounge bar Aura during the refurbishment.
The team at Seamill worked with Glasgow-based 10 Design on a scheme in which the Firth of Clyde view – now framed by the glass extension – was the main feature.
Plain carpets were selected so as not to draw diners’ eyes away from the view, and the scheme also had to connect the original part of the building with the new glass structure.
“We’ve got a new building and a Victorian building and it was about tying them together,” George explained.
“We wanted it to be timeless, not a style that would age.
“We used classic materials like stone, marble, wood and brass but we used them in contemporary ways. Granite tiles, for example, are a classic material but the cut of them is very unusual.
“10 Design were very good and understood what we wanted to get out of the room.
“We didn’t want to go too far with a theme or with the colour orange; there are touches of brass and little bits of orange but we didn’t want it themed.
“We wanted to let the views do the talking.
“Every design decision was taken around the view. No one can buy that from us or copy that. The location is second to none.”
It seems hotel guests and the Ayrshire locals agree.
Since The Orangery opened around ten weeks ago – just two days after the refurbishment was completed – George said it’s been “incredibly busy”.
A new menu, created by executive chef Scott Gilmour (see story right), is said to be going down a storm and there’s been a “definite increase” in the number of non-residents eating in the restaurant – so much so that George said the Restaurant Diary reservation system has been invaluable when it comes to managing bookings.
The early success of The Orangery has prompted Seamill Hydro to recruit additional staff over and above the ten that were added to the payroll ahead of the restaurant’s launch. It takes the total staff to around 140, although that number will peak at about 200 over the Christmas period.
The positive response to the new restaurant has also spurred on the team to press ahead with the next phase of refurbishment work, which will take in some of the hotel’s bedrooms in the coming weeks and lounge bar Aura before Christmas.
“We have self-funded as much as possible over the years, doing as much as possible through hotel profits,” he said.
“But with a project of this size we needed financial backing. Santander were very encouraged by the business and excited about what we’re doing here.
“We’ve grown the business during tough times and this investment will put us in an even stronger position.”

Image: Every design decision taken for The Orangery was based around the view across the Firth of Clyde.