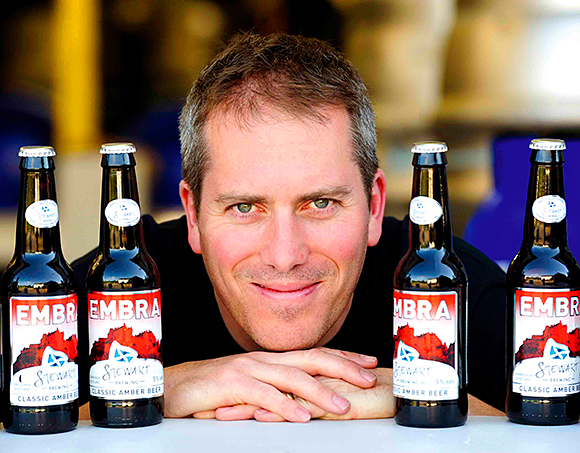 ON the day Sir Chris Hoy took his second gold medal at London 2012, making him the most successful British Olympian ever, a brewery in the cyclist’s home city was celebrating a gold medal of its own.

Embra, the 5% ABV amber beer from Stewart Brewing, was named Champion Bottled Beer of Britain at this year’s CAMRA Great British Beer Festival in London on August 7.
The beer beat competition from Yewbarrow, made by Great Gable Brewing Co in Cumbria, and Molson Coors’ Worthington’s White Shield to take the gold medal.
Steve Stewart, brewer and MD of Stewart Brewing, which is based in Loanhead on the outskirts of Edinburgh, said the win comes at a buoyant time for the brewery; it is set to move to a new £1.25 million purpose-built facility after Christmas, which will allow it to increase production from 500,000 litres to 2.5 million litres a year over the next two years.
“To win this accolade is truly an honour and a measure of all the hard work and commitment of the team at Stewart Brewing,” he said.
“We are on the cusp of increasing our exports and a national award like this is a real feather in our cap.”
Stewart Brewing wasn’t the only Scots brewer celebrating at the festival.
Black Gold – the 4.4% ABV stout from Cairngorm Brewery in Aviemore – was named a Champion Winter Beer of Britain, while 4.8% ABV Orkney IPA from the Highland Brewing Co in Orkney took bronze in the Strong Bitters category, behind brews from West Sussex and Devon.
Lewis Hill, brewery manager at Highland Brewing Co, said he was very proud to take the award.
“I feel it is a big achievement for a relatively small and young company to place in such a competition,” he said.
“We hope it demonstrates our commitment to the consistency of our beers: we have won CAMRA’s Champion Beer of Scotland award four times; the beer in question, Orkney IPA, was voted runner-up in the CAMRA Champion Beer of Scotland awards 2012; and in 2011 won the Brewing Industry International Awards Cask competition overall.”
This year’s Champion Beer of Britain title went to No 9 Barley Wine from Coniston Brewing Co in Cumbria, with judges describing the 8.5% ABV ale as having “fantastic finesse, reminiscent of a fine Cognac”.
Trawlerboys Best Bitter from Suffolk’s Green Jack Brewery took silver, while the bronze medal went to American Pale Ale from Dark Star Brewing Co in West Sussex.
As well as the overall winners, awards were presented across a total of seven different beer categories, including bitters, best bitters, strong bitters, golden ales, milds, winter beers and bottled.
Roger Protz, a member of the final judging panel, praised the standard of entries to this year’s competition.
“The judges in the final tasting were overjoyed by the tremendous quality of the beers this year,” he said.
“There wasn’t a poor beer in the competition and they were all of the highest quality.
“It was a tough choice and the final results were very close.”

Above – Beers looking at you: Steve Stewart with Embra. Image: Colin Hattersley Photography.