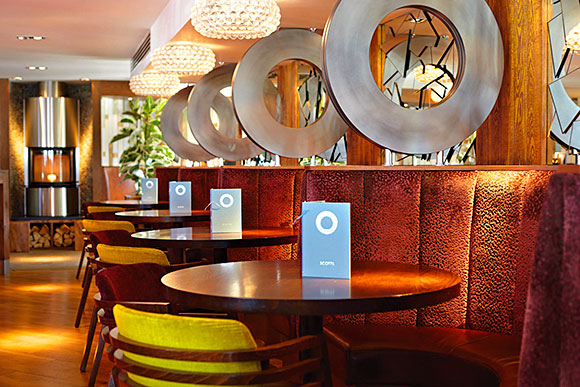 A FINANCIAL brick wall is standing in the way of operators seeking funds to invest in their premises.

But the banks’ reluctance to lend isn’t stopping proactive businesses from embarking on refurbishment projects.
That’s the view of Angus Alston of Hugh Stirling, who said the building firm is enjoying an upturn in work which suggests licensees are finding alternative ways to secure the money they need to improve their outlets.
A flick through the order book of the Glasgow-based fit-out specialist would reveal a healthy flow of contracts to upgrade licenced premises.
Among the jobs that Alston said will keep the firm busy for the remainder of the year is a bar refurbishment and extension at the Snozone in Xscape Braehead, which is due to start this week, and a new Italian restaurant in Kirkintilloch for Peter Di Caccia, owner of Riva in Bothwell, which will begin in September.
The contractor has also recently completed two refurbishments for Belhaven at the Linden Inn, Stirling, and the Bellman’s Bar, Penicuik, which have convinced Alston the industry is tapping into its creative reserves, as well as alternative sources of finance.
“It was really quiet a couple of months ago but in the last few weeks work has really picked up,” he said.
“We’re fairly busy at the moment and some of the projects that have perhaps been put on the back burner for some time are finally coming to fruition.”
Although work is continuing Alston has noted a difference in the sums of money being spent compared to pre-recession figures.
There has been, of course, a huge change in the banking culture, which has forced an increasing number of business owners to look elsewhere for the cash they need to invest.
“More and more people are having to self-finance in order to carry out developments, which can lead to frustration,” Alston explained.
“Clients who have got a good track record with their existing businesses are finding when they go to the bank they are not willing to support them and, as a result, they are having to fund it themselves.
“Most of our sub-contractors seem to be reasonably busy, and there are not that many people who are complaining they do not have enough work. Things have picked up; it’s just that you can never look further than a few months down the line.
“Caution is a fair description; not complete doom and gloom.”
Vince Sheppard, of business cash advance service Merchant Cash Express, agreed more people are finding it harder to get money through traditional sources.

More and more operators are having to self-finance refurbishments.

His firm has reported a 300% year on year increase in the number of businesses using its products, and he puts that down to a banking system which he said often fails to take individual circumstances into account.
“The local bank manager might know Joe Blogs who is running that pub and be confident he has a good business,” he said, “but his hands will be tied as to how much money he can give him.
“There is less discretion at a local level and that’s where our money becomes more attractive because we don’t care about your credit history, we don’t care about your overdraft, we are more concerned with your card sales and if you are doing something to improve your business that can only be good news for both of us.”

Image: Building contractor Hugh Stirling has worked on a number of trade projects, including Scotts at Largs.