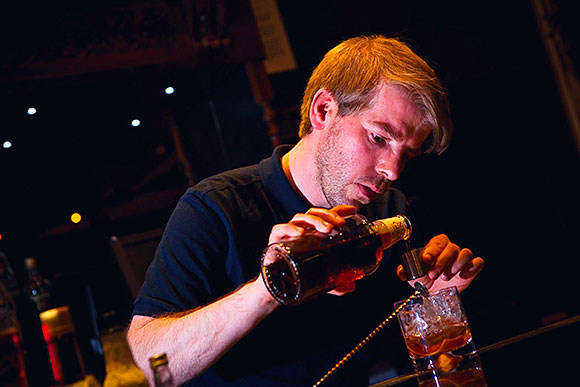 BARTENDERS were asked to step back in time recently in a cocktail competition held by The Naked Grouse blended Scotch.

Against the backdrop of Loch Turret, water source for Grouse’s Glenturret Distillery, mixologists were challenged to follow an authentic recipe for an Old Fashioned from 1806 using only only four ingredients: spirit, sugar, bitters and water.
The winning mix was created by John Collingwood, of No.28 in Newcastle, whose creation, The Bitter Sweet Grouse, was praised by judges for its “complex, tasty and marketable combination”.
The recipe includes a double measure of The Naked Grouse, two dashes of grapefruit bitters, two dashes of Angostura bitters, 10ml of Aperol and a syrup reduction made with beer from Northumberland’s Wylam brewery.
John’s victory was a close run thing, however, having claimed the win by a single point.
Maxxium UK, distributor of the Grouse portfolio, said entrants went to extraordinary lengths in their bid to win – one used a fire extinguisher and another transported an ice ball all the way from the south coast of England.
“We have been hugely impressed by the standard of entries into our challenge,” said Maxxium mixology chief Wayne Collins. “The creativity, imagination and skills by the UK’s bartenders have been incredible.
“We were blown away by John’s creation – The Bitter Sweet Grouse – as it accentuates the whisky rather than diluting its flavours.”

Image: John impresses the judges as he puts his drink together at The Naked Grouse Boathouse.