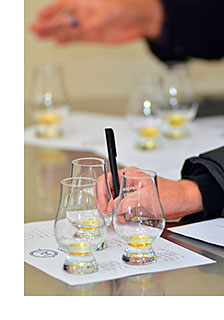 Shortly after launching the new Trump links at Aberdeenshire’s Menie Estate, it was confirmed that staff at the course’s luxury clubhouse will receive formal training in Scotch whisky.
The contract will see the team from The Whisky Ambassador educate the bar and restaurant team in a move said to illustrate the organisation’s commitment to “promoting Scottish culture and heritage”.
“We are thrilled to have the opportunity to work with Trump International Golf Links in the home of golf and the home of whisky to help customers learn about our national drink,” said Sue Beatt, director of The Whisky Ambassador.
“So many people stick to selling and drinking the best known brands but there is a whole world of wonderful whiskies out there to explore.
“Our partnership should give weary golfers the perfect tonic at the 19th hole.”
The training scheme serves as an introduction to Scotch whisky, explaining the origins of the spirit and teaching participants about the differences between the various whisky-producing regions and flavours.
Staff are also taught about nearby distilleries so they can pass on their knowledge to visiting tourists.
Adam Philp, food and beverage manager for Trump International, said the company is “committed to promoting Scottish culture and heritage and helping make the country the toast of tourists”.
“Training our staff to become whisky ambassadors is central to that. Whisky is just as much a part of Scotland’s story as its golf and we will offer the very best of both.”
The course will be delivered in conjunction with pub industry awarding body BIIAB and Aberdeen licensing solicitors James and George Collie.
Meanwhile a restaurant in Wishaw has become the first establishment to put all of its staff through the Whisky Ambassador training programme.
The seven waiters and chef at Artisan restaurant all took part.
Owner Derek Mather is a self-described whisky “obsessive”, and stocks several hundred whiskies at the restaurant.
“Derek Mather’s passion for whisky is undisputed and we were delighted to train his staff in his favourite national drink,” said Whisky Ambassador co-founder Victor Brierley.

Image: The course serves as an introduction to Scotch.