Operators are taking staff development more seriously than before, but more still has to be done 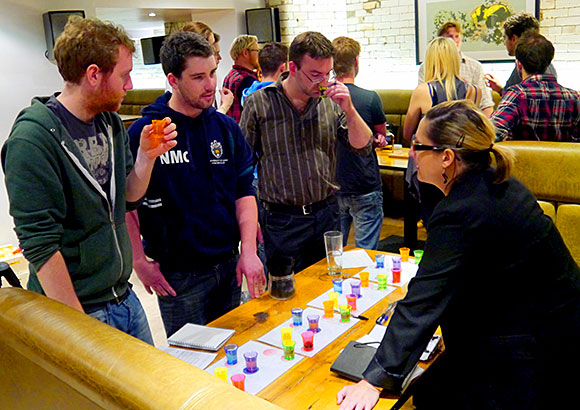 SCOTLAND’S hospitality businesses are investing more time and money into training than they were several years ago – but there is still plenty room for improvement.

Operators are taking training more seriously than they did in the past, though many still view it as a “tick box exercise”, according to training providers contacted by SLTN last week.
“Mandatory training is conducted as and when required, however a lot of businesses are still struggling where a financial investment is required to upskill staff,” said Sue Beatt, director of The Whisky Ambassador, Scotch whisky training specialist.
Building on the theme, Mike Cottam, tutor at the Inverarity Morton Wine School, said that although certain courses remain popular, overall demand for training is down.
“What I see happening across the trade as a whole is that demand has lessened, with the higher qualifications especially undersubscribed,” he said.
In an industry that retails such a diverse range of brands, training in product knowledge is key. But it seems that, depending on the outlet and the drinks category, the levels of staff knowledge can vary wildly.
Paul O’Donoghue, sales training manager at Enotria, said there’s plenty of scope to grow wine expertise.
“When you’re looking more at traditional pubs I don’t think there’s the same level of knowledge or interest, but I do think that’s beginning to change,” he said. “More bars and casual dining restaurants are beginning to see the importance of wine training and understanding their lists.
“It’s something customers are demanding more and more often now: they want staff to be well educated and knowledgeable about the wines they have on offer.”
Knowledge is still lacking in spirits as well, according to Julie Trevisan Hunter, marketing manager at the Scotch Whisky Experience in Edinburgh.
“There are still major gaps in the knowledge of bar staff serving our national drink, even in bars with stunning selections,” she said.
“Conversely there are some great bars with a surprisingly poor range of Scotch whisky – a lack of vision in how easily margin can be made from some great derivations of single malts.”
Although cocktails have become a major driver of spirits sales, it’s another area where skills could be better.

A lot of businesses are struggling where financial investment is required.

Ian McLaren, head of product training and mixology at Bacardi Brown Forman Brands, said training staff in making cocktails is just part of the equation – making sure bartenders have the ability to communicate their knowledge to customers is another.
“For me that’s the biggest thing: how do we communicate the information and knowledge that we are gaining?” he said.
“The internet is a wonderful thing in the information you get from it, but it doesn’t necessarily help you to communicate to somebody stood in front of you asking what drink to buy. A key thing we’re trying to do is to get people communicating effectively what drinks taste like, what they are, and why that’s interesting and relevant to the people in front of them.”
In the past it was often said one of the main barriers to investing in training was the transient nature of those working in the industry.
Beatt said that’s still the case to some degree, explaining that because staff often view the industry as a short-term career, employers can be reluctant to spend money on training them.
“In countries such as the USA people in these types of jobs are seen as professionals and are shown respect and appreciation,” she said.
“There is then the incentive for staff to develop to enable them to get good jobs in the industry.”
McLaren argued that more staff should look at the industry as a long-term career.
“Brands and spirits companies are recognising the skill set that bartenders have and are bringing them in-house,” he said. “There’s an increasing number of opportunities in that field.
“There’s definitely a trend of people taking it more seriously. And there’s increasing numbers of bartender operators – people who have been bartenders for a long time who have their own place.”

Image: Product knowledge is one of the key training areas for the licensed trade.