DRINKS distributor Marblehead has gone to the Poles again.

The firm has added to its Davna range of Polish vodkas with Davna Bizon. Made to a traditional Polish recipe, the spirit is said to capture the “unique taste of bison grass, the favoured food of the bison that roam the ancient forests of eastern Poland”.
The move comes after Marblehead ended its distribution relationship with Zubrowka bison grass vodka, which it had built up in the UK trade over 13 years.
“The time was right to launch Davna and bring a range of crafted premium brands to the UK,” said Marblehead business development director Dave Steward. “We launched Davna Czeri, flavoured naturally with Polish cherries, last year to much acclaim and we are delighted to bring Marblehead’s years of experience in the Polish vodka market to bear with the launch of the second flavour in the Davna portfolio.”
Steward pledged that the firm would add further Polish vodka styles to its range in future. 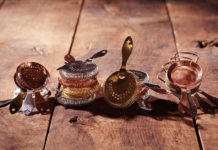 A back-bar needs style and substance

A bag of tricks for the back-bar

On the Tiki trail