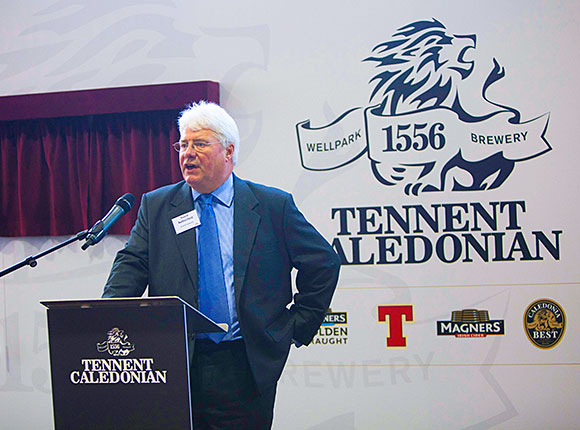 THE UK brewing industry was a very different place when David Rutherford, manufacturing director of C&C Group, embarked on his career.

David, who will retire at the end of this month, is a forty-year veteran of the industry, having joined Scottish and Newcastle Breweries in 1971 as a laboratory assistant.
There is no shortage of passion in the brewing industry, and speaking to David a month before his retirement, it is clear he cares deeply about the business. But the decision to join the industry all those years ago was made with his head, not his heart. Weighing up job offers from various companies, it was a discussion with his parents that opened the door to the brewing industry.
“I went home, as you do, to speak to my parents, and my parents said ‘go for brewing, it’s a job for life’,” David recalled.
“Their logic was that people will always drink.”
Working first as a laboratory assistant, then labourer, David worked his way up through the production side of the business as S&N grew into a massive presence in the UK beer market.
Along the way David was involved with the integration of a number of other companies into the S&N stable, including Nottingham-based brewery Home and Courage, learning skills that would be drawn on much later when C&C acquired Tennent’s and Gaymers.
“I was very fortunate at the time in the opportunities I had to progress and operate in different disciplines,” said David. “They just came along and found me. When you’re progressing through a business, being promoted, it’s a big incentive to stay there.”
As David’s career progressed, the brewing industry underwent steady change. Working for one of the country’s biggest players, he had a front row seat.
“In the 1980s you started to see consolidation in the industry, with investment starting to happen, equipment, automation,” he said. “But we also started talking together as brewers in terms of trying to find technical solutions to improving productivity, to better quality. During the ‘80s quality moved higher up the agenda.”
The 1990s saw a decline in beer volumes, further rationalisation and the emergence of international brands. Lager grew its market share within beer, and brewers appealed to consumers with premium brands.
Though the noughties have been tough for pubs and brewers, David is confident the industry is a better place now than 20-30 years ago.
“These days the quality [of the product] is better, there is an opportunity for individuals to develop and be involved in how the business operates,” said David. “In the ‘70s it was very much ‘do what you’re told son, I’m the head brewer, you just do it’. It’s certainly a safer place to work now.
“From a consumer’s point of view it’s got to be better, because the choice you have is endless now. And the amount of innovation that goes on has got to be good, not only for the consumer but for the people that work in the industry.”

Tennent’s is flexible and can make decisions quickly.

David joined C&C Group in 2009 as manufacturing director, and has relished the move.
“The beauty of Tennent’s as it now exists is that it’s a lot less bureaucratic than a bigger brewer,” said David. “We’re able to be fast in terms of decision making, we’re able to be flexible. An example of that is the new £4m bottling line.”
Recent years have seen an explosion in craft brewing, and David says there’s room for large and small to thrive. But he took issue with the marketing strategies of some craft brewers, who market themselves by criticising the larger brands.
“From my perspective it’s quite disappointing because behind the success of all beers, no matter who you are and where you make it, there’s a huge amount of hard work, talent, skill and, believe me, a pride in those products,” he said.
“At the end of the day the consumer will make their choice and choose which brand suits them best.”

Image: Rutherford speaking at the launch of the new bottling line at Wellpark this year.