GLENFIDDICH is hunting for malt whisky enthusiasts as it launches the third year of its Malt Mastermind competition.

The single malt, owned by William Grant & Sons, officially launched the 2012 competition at drinks trade show Imbibe earlier this month.
Entrants are asked to respond to a questionnaire on the Glenfiddich website, before a number of finalists will be selected to demonstrate their whisky skills in person in front of a panel of judges in London.
In addition to the title of Malt Mastermind 2012, a trophy and a cash prize of £1000, the overall winner will also be invited on a VIP trip to the Glenfiddich distillery, where they will have the chance to taste a number of rare expressions of the whisky.
“For the third year, we are seeking industry figures who have a passion for malt whisky,” said brand ambassador Jamie Milne, who will be promoting the competition at a number of trade events.
“We are looking for someone who embodies the pioneering spirit of Glenfiddich through their innovation and creativity and who also truly understands the complexities of malt whisky.”
The deadline for entries is September 30.
Meanwhile, the single malt brand has also announced a partnership with the Institute of Directors (IOD) which will see Glenfiddich sponsoring the Director of the Year Awards 2012.
The sponsorship has been signed as part of Glenfiddich’s 125 Business Pioneers campaign, which has set out to identify the country’s top ‘pioneering’ business people.
An initial list of 125 individuals was drawn up by Glenfiddich and Management Today editor Matthew Gwyther. The list was narrowed to 30 by the Director of the Year judging panel, and IOD members are now being asked to vote on who they believe are the most pioneering business people in various categories.
“As our founder, William Grant, was a true entrepreneur and pioneer of the single malt Scotch whisky industry, we feel that the 125 Business Pioneers campaign has a very natural fit with our brand values,” said Glenfiddich senior brand manager Annabelle Clarke. 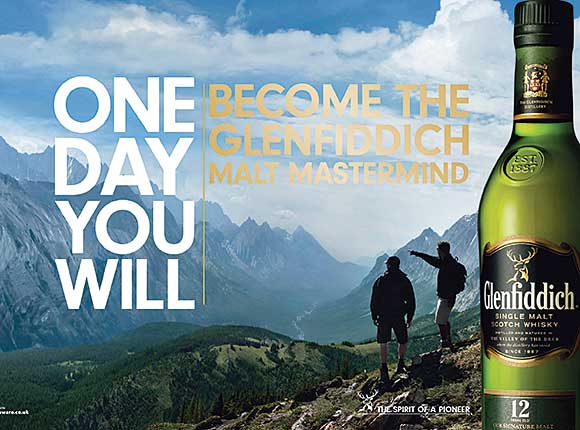 Image: Glenfiddich is on the hunt once again for malt whisky experts in its latest Malt Mastermind contest.