TO say Nasreen Aksi hit the ground running when she took on her latest restaurant venture is an understatement.

Just five days after she picked up the keys for The Italian Bistro on Glasgow’s Great Western Road, the venue was booked to host a wedding reception in the function suite – on top of the regular busy Saturday night trade in the 100-cover restaurant.
She has also been busy tweaking the interior, revamping menus and embarking on a marketing offensive for the restaurant.
Naz, who has run the Ashoka in Ashton Lane under franchise with business partner and head chef Hardyal Singh since 2006, admits it’s been a hectic start.

Building a business from scratch is not easy. I wanted an established business I could tweak.

But it seems she’s relishing the new challenge.
“People might wonder why I’ve taken on another business in the current climate but I think there’s so much potential here,” she told SLTN just ten days after she took over.
“Times are hard in this business – overheads and wages are higher and VAT is a killer; there are a lot of restaurants for sale.
“But I wanted a new challenge and I wanted to be my own boss and do my own thing.”
The experience Naz has in the restaurant trade gave her sufficient confidence to make the move.
Her first taste of the business came when she worked as a teenager in the Ashoka restaurants, at that time part of Charan Gill’s Harlequin Restaurants group. In time she would go on to run the Spice of Life and the Ashoka West End restaurants before acquiring the Ashton Lane outlet under franchise from new owner Sanjay Majhu, who bought the Harlequin business in 2005.
With her roots in Indian cuisine, it might seem a departure to take on an Italian restaurant. But Naz has pedigree in this area too.
Before taking over at the Ashoka, she had worked for a number of Glasgow’s Italian restaurateurs, including the late Mario Romano, and opened an Italian restaurant, Bertolini’s.
“I always wanted to do another Italian restaurant,” Naz explained.
“Ashoka is doing really well and I’ve got great guys in there so the time was right for me to take on a new challenge.”
With her mind made up, Naz didn’t have too long to wait for an opportunity to come up.
A call to property agent Christie & Co to outline her search criteria informed her that the leasehold of The Italian Bistro, which was part of the Partners Restaurant Group, was on the market.
She viewed other sites too, including some in the city centre.
But the sandstone property at the road entrance to Gartnavel Hospital, which was built in the late 1890s as Kelvinside Railway Station and previously traded as Lux and Stazione restaurants and, before that, Carriages, ticked all the boxes.
“I’ve probably driven past it a million times and I’ve always loved the building but I never imagined I would take it over,” she said.
“I wanted a business that was established and trading well. I came in here about five times before I bought it and every time it was busy.
“Trying to build a business from scratch is not easy. I wanted to buy an established business and tweak it.”
Naz intends to retain many key elements of The Italian Bistro; the staff, venue name and branding and style of cuisine remain largely unchanged.
But she has begun putting her own stamp on the interior.
The first floor function room, which can accommodate 70 seated or 120 banquet-style, and has a separate bar and terrace, has been painted and fixed seating reupholstered.
Downstairs in the restaurant, the dark wood and red decor has been retained and the banquette seating covered in a red and cream striped fabric. New tables and chairs have been ordered and large red light fittings are due to be installed.

I’ve driven past it a million times and love the building but I never imagined I would take it over.

Naz has big plans to drive the functions business and develop the restaurant’s wine list and food offer – in line with the current Italian theme.
“With the food I’m trying to make it all halal and kosher so I can cater for those markets too,” she said.
“There’s an Indian restaurant on every corner now and I wanted to do something different. This will complement Ashoka Ashton Lane.
“The reality is, the new generation of Asians don’t want to eat curry every night or every time they go out; if I make it all halal and kosher here it opens it up to new markets.”
Naz also has the staff at the nearby hospital in her sights: she has introduced a morning tea, coffee and scone deal and is offering medical staff a discount on lunches. And she plans to introduce a cocktail and snack menu.
“You have to put yourself out there – you can’t just be a restaurant any more,” she added.
“I love a challenge and I think there’s so much potential here.” 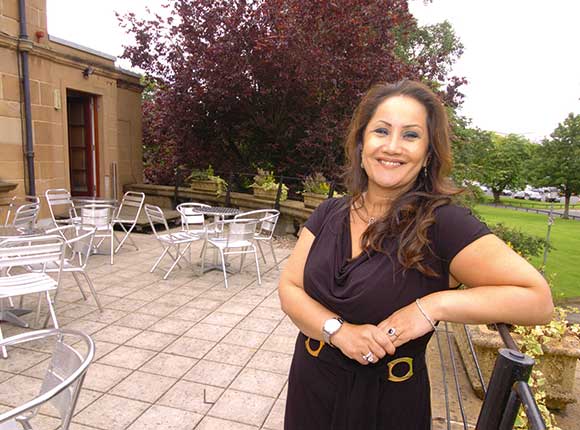 Image: Naz Aksi, pictured above outside her new business, said she was keen to move back into the Italian food scene.