Greene King reported an 8.6% rise in profit before tax to £152 million for the 52 weeks to April 29, with revenues up 9.4% to a record £1.14 billion.
Driving the results was the firm’s retail division, including 103 managed pubs in Scotland, which is said to be GK’s “biggest and fastest growing business”. 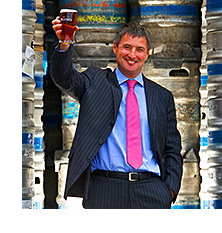 The division, which numbered 954 pubs, restaurants and hotels across the UK, saw operating profit rise 13.3% to £149.6m, on revenues up 13.1% to £803.9m.
Conditions were more challenging for the firm’s leased and tenanted pubs division, which operates in a sector said to have come under pressure over the past five years due to factors like the smoking ban and the recession. The division, which numbered 217 in Scotland and 1500 in the UK as a whole, saw revenue drop 2.2% to £162.7m, albeit from 6.4% fewer pubs; operating profit was down 3.1% to £72.2m.
GK aims to add to its managed estate and consolidate its leased division by off-loading “lower-performing” outlets.
On brewing and brands, the volume of its core brands (including Greene King IPA and Belhaven Best) was down 0.7% in an ale market down 5.3%. It said the second half volume decline was partly attributed to a “more competitive environment in Scotland” and rising take home prices. But the brands were said to have shown “strong growth in export, take home and free trade”. Operating profit from brewing and brands fell slightly (0.3%) to £33m as revenue rose 5% to £173.8m.
With Belhaven now fully integrated into GK, it was the first time its performance was not reported separately.
“The Scottish pubs did very well and the retail sector led the Greene King results,” said Euan Venters, boss of GK’s brewing and brands. “The managed pub business did very well.
“And as far as the brewing business in Scotland is concerned, we showed volume growth. But because the market is competitive, and because of price increases, mainly from lager products, the margins were a bit more under pressure.
“The key for us was that we showed growth both in Belhaven beers and in overall volumes. Overall, I would say it’s a solid set of results.
“What I would also add is that, even though Belhaven is integrated, we’ve worked very hard to make sure the front end of the business and what the consumer and the trade sees is still very much Belhaven.”
Venters noted the growth made by Belhaven beers, notably Best, in the export market, and said their Scottish credentials were a major asset in places like North America. He also highlighted the importance of the expanded Belhaven beer portfolio, which now includes the stout Belhaven Black, Belhaven IPA and Belhaven Golden Ale, at a time when drinkers are looking for more choice.
Last year the company spent £850,000 to enhance its Dunbar brewery, a move Venters said was a “clear signal” of GK’s commitment to brewing in Scotland.
On the political front, he re-affirmed Greene King’s support for minimum unit pricing for alcohol, stating its preference for it to be set at the same level on both sides of the border.