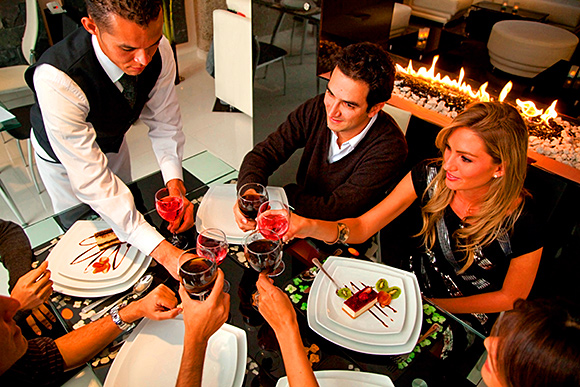 RESTAURANT and bar operators with no online presence are missing out on more than £30,000 of business a year, a new report has claimed.

Livebookings’ European Dining Index said UK restaurants receive more than £126 million of new business through online reservations.
But it claimed nearly a third of outlets aren’t reaping the rewards because they don’t have a basic website, with 93% failing to use digital media to reach and engage with potential customers online.
With the number of online restaurant bookings said to have doubled in the first three months of this year compared to 2011, and bookings made through mobile devices and smart phones almost trebling in the period, Livebookings said operators who ignore these trends stand to lose out.
Chief executive Colin Tenwick said the internet plays a fundamental role in how restaurants promote themselves to customers, while diners now increasingly expect to be able to locate, book, review and recommend restaurants online via their smart phone.
“Restaurants not making use of online, mobile and social bookings is almost tantamount to adopting a ‘no children’ policy; they shut themselves off to roughly the same amount of potential business,” he said.
“A significant proportion of customers looking for a restaurant start their search online or on mobile.
“In the knowledge that 18% of online restaurant bookings now come through mobile devices – a figure that is set to rise to 27% by the end of 2012 – restaurants can’t afford to overlook this fast growing medium.”
With staff costs estimated by the report to be have risen by 48%, rent and rates by 18% and food costs by 17%, Livebookings suggested rising overheads is often blamed by operators for their unwillingness to invest in technology. Almost a third of restaurant owners say it’s one of their lowest outgoings – despite suggestions by the report that 91% recognise its importance.
“From this data, we can see that the priorities of many restaurants haven’t changed significantly since the 1950s,” Tenwick added.
“Staff, rent and the price of raw materials are still the major concerns, and restaurants simply don’t have the time or leeway to stand back and consider longer-term trends or changes that could help their businesses to survive the double-dip recession.
“Almost all other consumer-facing sectors, led by retail and travel, have radically changed their marketing and promotion strategies to incorporate the massive advantages that online, mobile and social developments are able to bring
to them, and now it’s time for all UK restaurants to do the same.”

Image: A growing number of consumers looking for a restaurant now search online.