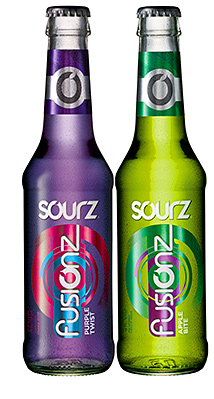 ONE of the newest ready-to-drink brands to hit the market is to make its TV debut as part of a new campaign.

The animated Sourz Fusionz ad shows branded bottles, cans and the liquid itself – which comes in Apple Bite and Purple Twist variants – with separate versions of the ten-second stings for each of the packaging formats: 330ml cans and 275ml and 700ml bottles.
The TV ads are part of the ‘get sorted for’ campaign, which forms part of a claimed £10 million investment in Sourz this year by distributor Maxxium UK. As well as the TV ads, activity includes media partnerships with MTV and Capital FM, a national sampling campaign, festival activity and trade support.
Eileen Livingston at Maxxium UK said the new ads aim to build on the inaugural TV ad for Sourz, which aired last year to highlight the new 4% ABV RTD variant.
“On the back of significant growth in 2011, it’s another exciting year for the Sourz brand, which continues to go from strength to strength,” she said. “Sourz Fusionz was launched in April of this year and the new TV presence will further support this new ready to drink product from Sourz.”
Launched in 1999, Sourz has an ABV of 15% and is available in six core variants: Apple, Cherry, Blackcurrant, Tropical, Pineapple and Raspberry; limited edition variants include Spirited Summer Berry and Spirited Cranberry and Apple.