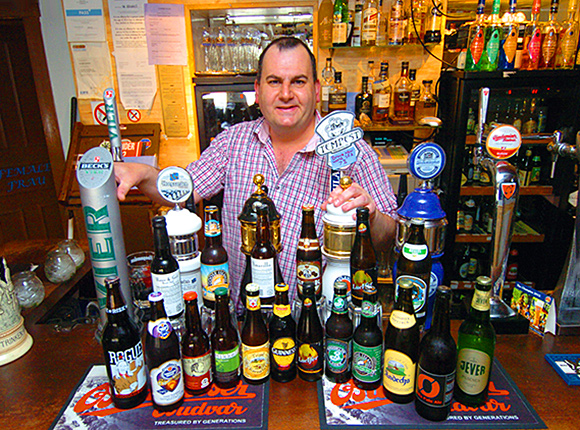 Operators of bars and specialist off-trade outlets told SLTN that drinkers are increasingly seeking out more complex and challenging beers.
At drinks shop Luvians in St Andrews, a broad range of beers from North America, Belgium, Germany, Italy, Norway, New Zealand and France is sourced from a number of English-based suppliers, such as Beer Paradise and Elite Beer.
Beer buyer Cosmo Sutherland said the store’s customers broadly fall into two categories: those that stick to domestic beers and those that are interested in a broader selection of brands from around the world. This latter group tends to be younger and predominantly male consumers, he said, though there are young females who are also interested in the category.
“In places like Belgium and Germany you’ve got all sorts of really interesting little breweries that do all sorts of quirky things, like using smoked malt or wild yeast and things like that,” Sutherland said.
“So quite frequently people just ask for something interesting and you recommend something. If they like it they’ll come back and ask for another one similar to that or something else different.
“They’re usually quite happy to ask questions and go along with what you recommend. Quite a lot of people are [knowledgeable] these days. I think because it [the category] is becoming bigger.
“As opposed to just having a lager or an ale it’s coming to that stage where there’s all sorts of different kinds of lager, different kinds of ale, smoked beers, barley wines, wheat beers.”
James Wrobel, owner of specialist beer and wine shop Cornelius in Edinburgh, is also used to being quizzed by his customers when they are browsing for new brands and styles of world beer.
Cornelius currently stocks between 300 and 400 different beers, with the majority sourced from North America, Germany and Belgium, as well as Scotland and England.
Wrobel said consumers are thirsty for knowledge.
“They want to know strength, they want to know where it comes from, and after that they might be interested in how it’s brewed or what particular hops or malts are used in it,” he said.
“But the overriding thing is strength and cost, because you pick up a bottle of beer these days and it could be 3% or it could be 30%.”
The retailer has also noticed a shift in consumer tastes in recent years.

People are becoming more knowledgable – the category is getting bigger.

“I think people have possibly had enough of the insanely hoppy IPAs and are heading towards [other things],” Wrobel added.
“Certainly around Christmas we couldn’t get enough heavier stouts in. Interesting darker stouts and big imperial stouts were proving very popular at Christmas.
“I don’t know what’s going to be coming round the corner. A couple of years ago it was all about IPAs and now darker, maltier, stout-like beers are proving very popular.”
It’s not just specialist shops that are witnessing strong sales of world beers.
Edinburgh bar Brauhaus stocks several hundred world beers in bottled format as well as seven different beers on draught, including Leffe and Weihenstephan.
Manager Mark Kerr said the venue’s customer base ranges from world beer connoisseurs to relative newcomers to the category who rely on the staff to recommend brands.
And he reckons it’s now easier than ever for operators to build a respectable range of world beers.
“You can find so much stuff online and then go source it yourself,” he said. “It has become easier because there are a lot more suppliers popping up and even cash and carrys and wholesalers are selling more world beers, which does help. It brings the cost down a bit as well.”
Kerr said Scottish and English beers are becoming more popular as their flavours are often influenced by beers from other countries. “More and more British brewers, and especially English brewers, are brewing similar beers to the Americans,” he added.
Wrobel at Cornelius agreed that a growing number of consumers are turning to local breweries as they look for “people doing the same sort of stuff [as overseas breweries] but round the corner”.
St Andrews farm shop Balgove Larder has also seen an upturn in sales of Scottish ale.
Managing partner Will Docker said provenance has become a much bigger issue with beer drinkers.
“Provenance is not necessarily as perceptible as [taste], but it’s definitely another sense to add to the enjoyment of the food or drink you are eating,” he said. “It’s paramount to tell that story and let people know where things come from so they can build up a very visual image in their mind while they’re consuming,” he said.