Technology can bring benefits for bar and restaurant operators

The technology, which enables consumers to pay for products using near field communication (NFC) by waving an NFC-enabled card or smart phone in front of a corresponding terminal, has already been adopted by companies in the retail sector.
And the firms behind it reckon contactless payment technology can bring a number of benefits for the operators of on-trade businesses. 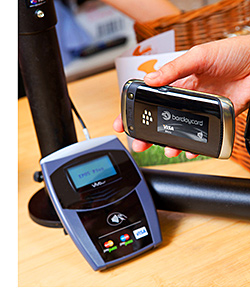 Andrew Burrows, partner channel manager at IT specialist PXtech, said the technology is already becoming “a standard expectation amongst consumers” in the retail sector.
“Advantages for the trade include speeding up transaction processing times, convenience, and the range of security measures which have been incorporated to mitigate possible risks, ensuring that cardholders and merchants are protected by banks to further minimise fraud and misuse,” he said.
According to Burrows, the majority of contactless devices do not actually transmit the names of cardholders in order to limit the amount of information communicated during the transaction, with some transactions not even using the cardholder’s account number.
Barclaycard is one of the UK companies to have introduced contactless payment technology for its customers.
Richard Armstrong, Barclaycard’s head of payment acceptance, said the biggest benefit to the licensed trade is a “quicker customer turnover, and a reduction in those abandoned purchases by people fed up of queuing at the bar”.
“Barclaycard has championed contactless technology, taking the lead in assisting vendors in having the correct terminals in place, and providing customers with cards which facilitate contactless payments,” he said.
“They also worked alongside Orange last year to produce the first mobile handset in the UK capable of making contactless payments, and, more recently, released PayTag, a sticker which can be applied to any flat surface, effectively bringing mobile payments to a much wider audience.
“There is growing sentiment among customers and businesses alike that contactless payments will soon become mainstream and the preferential means of payment for the masses.”