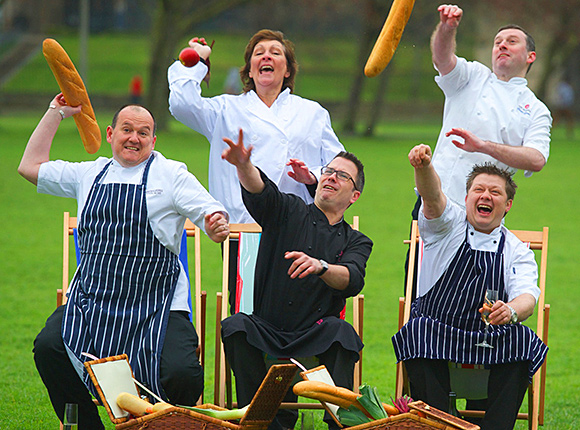 THIS year’s Taste of Edinburgh is shaping up to be the biggest and best in the event’s six-year history, organisers say.

Speaking as food celebrity Loyd Grossman became the latest name to sign up, show manager Francesca Weil said the food and drink festival promises the “most illustrious and exciting” restaurant line-up to date.
Former Masterchef judge Grossman will join award-winning chefs Jeff Galvin and Jason Atherton and Channel 4’s The Fabulous Baker Brothers at the event, which will take place at The Meadows from July 6 to 8 and is now in its sixth year.
Following the introduction of Glasgow venues for the first time in 2011, Taste of Edinburgh 2012 will also feature top chefs and restaurants from across Scotland and beyond, including Michael Smith from The Three Chimneys on the Isle of Skye, Geoffrey Smeddle of the Peat Inn near St Andrews and master patissier Eric Lanlard of Cake Boy in London; the chefs will demonstrate their own styles of cooking live in specially-created demo theatres.
The line-up of guest chefs will be joined by chefs from 16 Scottish restaurants, including Edinburgh’s Angels with Bagpipes, The Balmoral, Cucina at Hotel Missoni, Forth Floor Restaurant, Plumed Horse, Restaurant Mark Greenaway, Tigerlily and Valvona & Crolla Vincaffe.
Also set to be represented are Glasgow eateries Café Gandolfi, Two Fat Ladies at The Buttery and Kama Sutra; Orkney’s Balfour Castle; Chez Roux from East Lothian and the Road Hole Restaurant at the Old Course Hotel in St Andrews.
Other features of this year’s event include the Country Kitchen, which will showcase produce from Orkney and Lanarkshire; the S. Pellegrino Trilogy Masterclass, which will give visitors the chance to try local and seasonal ingredients paired with both wine and water; the AEG Cookery School in association with Edinburgh School of Food & Wine; and the Weber BBQ Experience.
Weil said more than 30,000 foodies are expected to attend across the three days.
“Taste of Edinburgh 2012 will deliver the event’s most illustrious and most exciting restaurant line-up to date, including not only some the finest restaurants in Edinburgh’s dining scene but some of the most renowned and award-winning restaurants and chefs throughout Scotland,” she said.
“Now in its sixth year, the event has grown in stature with some of the biggest names in food and drink travelling from far and wide to showcase their skills and knowledge to an audience of 30,000 foodies – a build on last year’s 25,000 visitors.
“Scotland boasts some of the finest produce and ingredients in the world so it’s not surprising that Taste – the country’s biggest food and drink festival – continues to attract such big names year on year.”

Image: Cooking up a storm: chefs from across the UK will be at Taste of Edinburgh 2012.