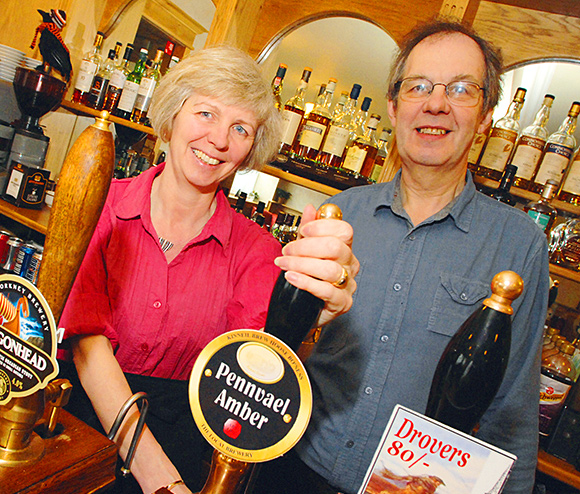 A CHANCE conversation between friends in a pub sowed the seeds of a business link that’s putting Bo’ness on the cask ale map.

Home brew enthusiast Stuart Simpson had long dreamed of turning his hobby into a commercial venture.
So when local cask champion Gail Fairholm revealed her desire to open a ‘brew-pub’, the pair began discussing how they could help each other.
Convinced of the trade potential in the town’s run down, former British Legion Club, Fairholm and husband Giles acquired the premises. They developed a pub in part of the space with Stuart renting a room to set up a microbrewery.
That was last October and since then the two businesses have helped each other grow: the Corbie Inn provides a showcase for what Stuart makes at the Kinneil Brew Hoose, while the bar is building a reputation as a cask ale destination.
“I ran pubs in Edinburgh years ago and I swore I’d never go back in!” Gail told SLTN.

A lot of people are coming for a beer and visiting the brewery.

“But I used to drive past the place and always thought it would make a really good pub. It’s been good for us having a brewery on the doorstep – it puts bums on seats on a Tuesday night.”
Despite being an experienced operator, it was as a consumer that Gail developed a passion for cask ale.
A long-standing member of the Bo’ness Real Ale Appreciation Society, which has no links to CAMRA, she’s heavily involved in running the town’s annual Real Ale Festival.
The event, which takes place from October 5-6 this year, is now in its 12th year and raises funds for charity, with local businesses sponsoring each one of the casks on offer.
It was because she knew there was a following for real ale in the town that the Fairholms decided to base their business around it. The pub also offers food and welcomes families.
“We’re shifting a whack of beer – ten or 11 casks of real ale a week,” Gail said. “We have six taps on, we rotate Stuart’s beers from week to week and they’re really popular; we normally sell three or four casks a week.”
Talking to SLTN last week, it was clear that Stuart is just as satisfied with the progress the Kinneil Brew Hoose is making and the pay-off from the link to the pub.
He’s currently focused on brewing two beers – the 4.2% ABV Caer Edin Dark Ale and the 4% ABV Pennvael Amber Cask Beer – so-called after the Pictish names for local places. Pennvael is Pictish for Kinneil, a local village and also the name of the ancient seat of the Hamiltons to the west of Bo’ness, while Caer Eden takes its name from Carriden, another local area; Caer Eden is also what the Welsh call Edinburgh, explained Stuart, as it translates as ‘fort on the hill’ in their tongue.
A third recipe is in the offing, a “lighter” beer weighing in about 3.6% which Stuart hopes to release over the summer.
“Some drinkers in the pub prefer Caer Eden and others prefer the Pennvael, and each one will tell the other to hurry up and drink so they can get theirs back on!” he said.
“But I’d say the Caer Eden, which is a porter-style ale, has a slight edge so far.”
As for distribution, Stuart aims to offer a personal service, pledging that he will deliver the beer to anyone within a 30-mile radius. Destinations beyond that get complicated due to the challenge of retrieving casks, he said.
Pubs in Fife, Linlithgow and Falkirk have all expressed interest in taking the beers on, with Stuart also selling his wares in beer festivals as far north as Aberdeen and as far south as Brighton.
He told SLTN the growing interest in cask ale generally had meant it was a good time to set up the brewery, even though he had hoped to be up and running as much as three years before finally getting off the ground.
He’s also convinced the link with the pub next door is a major advantage, stating that the combination is bringing people to a town already popular with tourists thanks to attractions like the Bo’ness-Kinneil steam railway.
“Setting up next to the pub has definitely helped,” he said. “We’re getting a lot of visitors – a lot of people are coming for a beer and visiting the brewery – it’s a destination pub.”