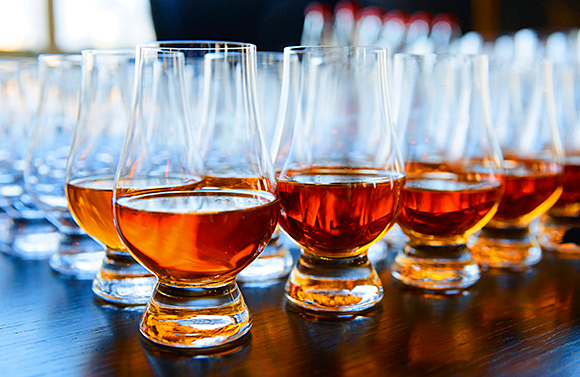 A GROWING appreciation for malt whisky, including among younger drinkers, has been credited with driving sales in restaurants and bars.

The volume of malt whisky sold in the UK on-trade rose by an impressive 31% in the year to the end of April, according to new figures from the Wine and Spirit Trade Association.
The domestic rise came as Scotch continued its strong growth in export markets last year, rising 23% to reach £4.23 billion, according to figures released by the Scotch Whisky Association (SWA).
Now, with the findings of the WSTA’s latest Market Report, there are signs that success is starting to spread to the home market.
“It’s good to see that in the UK consumers are also increasingly developing a taste for Scotch, in particular they are deciding to drink malt Scotch whisky in restaurants, bars and clubs as well as at home,” said SWA communications manager Rosemary Gallagher.
“There’s an increasing number of specialist whisky bars opening across the UK and it seems that younger consumers are developing a taste for premium blends and malts, as is happening overseas.”
The WSTA suggested whisky sales might be linked to the trend that also saw wines and spirits at the top end of the market continue to grow in the off-trade last year – wine sales above £10 were up 32% by volume in shops, it found.
This was despite the price of wines and spirits rising at more than twice the rate of inflation and sales falling across the board.
Sales of wine in the £7-£8 bracket in the off-trade were up 30% in volume terms, as off-sales of wine at higher price points “grew significantly”.
But the volume of wine sales fell by 3% in shops and 8% in bars and restaurants over the year, with spirits down 2% in shops and 1% in the on-trade.
In other findings, the volume of on-trade Champagne sales fell by 13% while sales of sparkling wine rose 2%.
The WSTA said the average price of alcohol increased in all categories across the off-trade.
“The above inflation increase in the prices of wines and spirits comes as consumers are feeling the pinch and being forced to cut back so it’s perhaps not surprising that volume sales overall are depressed,” said WSTA interim chief executive Gavin Partington.
“But there are encouraging signs elsewhere with wine at higher price points showing strong growth over the year.”

Image: Malt whisky is becoming the drink of choice for more consumers, the SWA said.