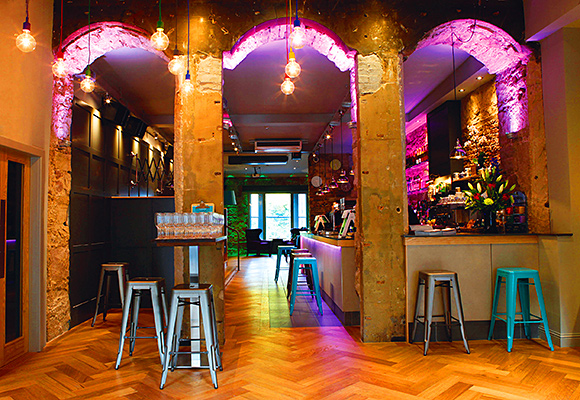 IT’S a thought for most people to up sticks and relocate 400 miles away.

For Mitch Stark and Tim Douglas, the chance to breathe new life into Edinburgh gay venue CC Blooms was more than enough of a draw.
The couple were running a country pub in the Berkshire town of Newbury when the outlet in Edinburgh’s old town came onto the market.
As Mitch told SLTN last week, the opportunity to acquire a venue they knew so well – and the chance to return to city life – was too good to miss. Recalling its days as the Greenside Inn, Mitch said he and Tim had fond memories of nights out in CC Blooms, which it was renamed in 1994 after Bette Middler’s character in the 1988 film Beaches.
But the acquisition, which went through in 2008, wasn’t all plain sailing.
In the aftermath of the global financial crisis, bank funding to acquire the Punch Taverns lease was pulled at the last minute, leaving Mitch and Tim the task of securing funding from alternative sources.
Then, once the deal went through, the couple faced the challenge of splitting their time between the capital and Newbury for six months until their existing pub was sold.
In that initial period they continued to trade the 400-capacity CC Blooms as a late night venue, implementing new entertainment and developing a roster of club nights.
But a major revamp was always their long-term plan.
A deal agreed with Punch saw the landlord fund the refurbishment, with Mitch and Tim repaying the cost through their rent.
When it came to the project itself, Grant Rough, of Rough Design, was handed the task of creating a new look for one of Edinburgh’s oldest gay venues, which is based next to the Playhouse theatre.
The eight-week refurbishment focused on the ground floor area, with the basement club space trading throughout.
Underpinning the design process was a desire to operate the venue as a bar throughout the day as well as introduce food. A large kitchen has been built in the former office, which was relocated to the cellar.
The couple’s prior knowledge of the venue also had some bearing on the internal changes.
In the ground floor bar, features Mitch recalled from its days as the Greenside Inn have been restored and reinstated. False ceilings have been removed to reveal original cornicing and three large stone archways, while large windows at the rear of the venue, overlooking Calton Hill, have been opened up, flooding the space with natural daylight.
Repointed stone and exposed brickwork feature throughout, while the glamour of 1950s airlines like Pan Am inspired much of the couple’s choice of furniture and lighting.
Downstairs, the club remains the same, as has the venue’s name.
“We did think about changing the name but it’s so well known worldwide; Julian Clary has mentioned it in his autobiography, Graham Norton talks about it – I think to change the name would have been wrong,” Mitch said. “It’s an institution.
“We wanted to refurbish downstairs too but a lot of our regulars like that clubby feel so we kept it as the old CCs.”
The combination of old and new appears to be working well. Since its relaunch a few weeks ago, with extended opening hours (11am to 3am Monday to Saturday and 12.30pm to 3am on Sundays), CC Blooms has attracted a broad clientele.
And the plan for the revamped ground floor space to double as cafe bar by day and a late night venue also looks to be coming to fruition.
On drinks, a new premium spirits and cocktail offer is said to be proving popular.
And when food comes on stream next month – the menu will major in sharing platters and tapas-style dishes – Mitch reckons the outlet will offer “something for everyone”.
“CC Blooms is a gay venue and always will be, but we’re attracting a very varied clientele during the day – and that’s great,” he said.
“With the Playhouse next door, we’ve got people coming in for coffee and cakes in the afternoon. Then in the evening it’s more of a late night bar and when it goes into nightclub mode it’s a heavier gay crowd.
“It works on all levels; all credit to Grant for the design.
“One of the comments we got on Facebook was ‘CC Blooms is no longer the place you end up, it’s the place to be’ and that told us we’d got it right.” 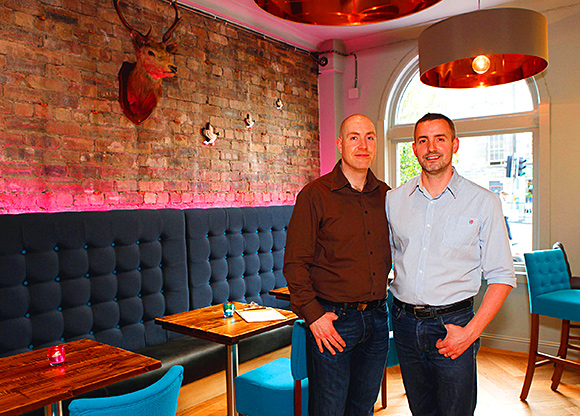 Images: The revamp of CC Blooms saw Mitch and Tim (above) uncover many of the premises’ original features, including three stone archways (top) and large windows at the rear of the venue overlooking Calton Hill.