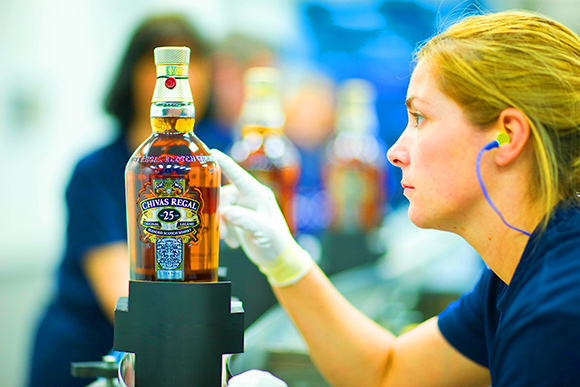 THE Scotch whisky industry received another shot in the arm last week when distilling giants Chivas Brothers and Diageo unveiled plans for major investments in the sector.

Bell’s and Johnnie Walker owner Diageo said it will plough more than £1 billion in Scotch whisky production over the next five years, while Chivas, the whisky and gin business of Pernod Ricard, pledged to spend £40 million annually to increase its distillation capacity.
Both investments are said to be a response to growing global demand for Scotch whisky.
Diageo intends to build a new malt whisky distillery as well as expand existing production facilities. It will also invest in new warehousing capacity to house the millions of extra litres of whisky produced as a result of the distillery investments.
Plans will be developed for a second new distillery, which it said will be built if global demand for Scotch is sustained at expected levels.
The fresh investment comes after Diageo spent £40m building Roseisle distillery on Speyside last year and £3.5m expanding Caol Ila on Islay.
But the plans were criticised by Unite Scotland, which represents many of the workers affected by the closure of the Johnnie Walker bottling plant in Kilmarnock earlier this year.
Diageo chief executive Paul Walsh said: “Over recent years our brands have achieved remarkable, sustained global growth. We expect that success to continue.”
Chivas Brothers, meanwhile, will open a new bottling hall in Paisley this summer, which will increase its emphasis on hand-bottling for prestige editions like Chivas Regal 25 and Royal Salute. It also plans to increase malt whisky production, with expansions at Glenallachie, Glentauchers, Tormore and Longmorn distilleries, and to reopen Glen Keith distillery in April 2013, resulting in a 25% increase in capacity.
“This investment, allied to strong market growth, a continued commitment to innovation and the best suited portfolio to target the most profitable opportunities, will provide the basis for future value growth for our company,” said Chivas Brothers chair Christian Porta.