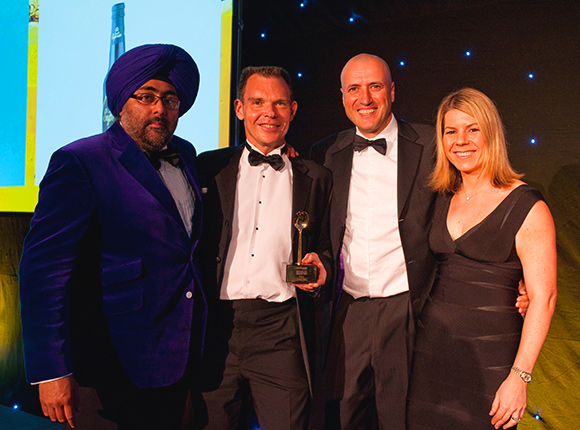 TWO Scottish drinks firms, a pub and a bartender are celebrating after winning top recognition in this year’s Scottish Food & Drink Excellence Awards.

VC2 Brands, Spencerfield Spirit Company, the Puffer Bar & Restaurant on the west coast island of Easdale and Fredrika Cockburn, who works in the Palm Bar at Edinburgh’s Balmoral hotel, took the spoils at the event at the Doubletree by Hilton Dunblane Hydro Hotel.
Stirling-based VC2, whose brands include Stivys and Boe gin, beat competition from Gordon & MacPhail, Fyne Ales and Pincer Vodka to take the top prize in the drinks category for its 6% ABV Double Espresso coffee beer.
Spencerfield Spirit Company, which is based in Inverkeithing, Fife, was named Export Business of the Year, while Summer Isles Foods was runner-up.
In the Food Tourism category, The Puffer Bar & Restaurant on the island of Easdale, in the Firth of Lorn 16 miles south of Oban, took the top prize, beating competition from Summer Isles Foods and Taste of Arran.
The Young Talent Award went to The Balmoral’s Fredrika Cockburn. Aberdeen-based chocolatier Jamie Hutcheon of Cocoa Ooze and Sarah Allison of Blackmount Foods in Lanarkshire were runners-up in the category, which was this year expanded from chefs to take in young talent across the food and drink industry.
In other categories, Borders Biscuits was named Business of the Year, Loch Duart Ltd topped the fish supplier category, Macsween of Edinburgh was named the top meat supplier, Nairn’s oatcakes won the confectionery and snacking award, and Cuddybridge Apple Juice was named Foodservice Product of the Year.
Rural Affairs secretary Richard Lochhead said the awards showcased the quality and diversity of Scottish produce.
“We’re fortunate to have a wealth of fine natural ingredients on our doorstep, as well as the producers with the expertise and entrepreneurial skills to make the most of our natural larder,” he said.
James Withers, chief executive of Scotland Food & Drink, said this year’s event highlighted the vibrancy of Scotland’s food and drink industries.
“The Excellence Awards provide a snapshot of everything that is great about Scottish food and drink – from mouthwatering products to innovative companies and inspiring people,” he said. “The breadth of entries showcases just how varied the sector is with artisan producers, multi-national companies and everything in between combining to create our internationally-renowned land of food and drink.”