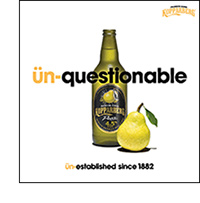 The ‘un-established since 1882’ campaign kicked off last month and also includes television advertising as well as a specially-designed Facebook app.
The Kopparberg Festival Player features a range of festival music. It combines Last.fm data with Spotify’s streaming capability and allows Facebook users to create their own music playlists.
The app is part of a music festival focus for Kopparberg this summer. The brand will be appearing at 15 festivals and events over the summer months, including Rockness.
The new advert, which was shot in Stockholm, is running on television and in cinemas.