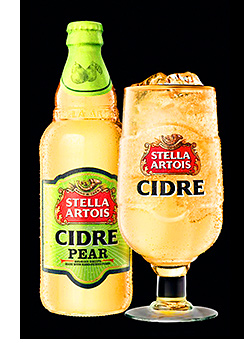 Currently being rolled out across the on and off-trades, Stella Artois Cidre Pear is said to have a “crisp, sophisticated and refreshing” taste.
Like the original apple variant, which launched last year, Cidre Pear is said to be produced to a Belgian recipe using hand-picked pears; the new cider, which is available in a 568ml bottle, is intended to be poured into a chalice, rather than a pint glass.
The launch of Stella Artois Cidre Pear is being backed with a marketing campaign, which will run throughout the summer.
AB InBev said the decision to launch the pear variant followed a successful first year for the original variant, during which the brewer said it achieved sales of £50 million and the equivalent of 39 million pints in the off-trade.
The pear cider category is also said to be enjoying strong growth, with values up 17% last year.
“We are absolutely delighted with the success of Stella Artois Cidre and it is our intention to continue to innovate to give choice to our consumers, and growth opportunities for our customers,” said James Watson, Stella Artois’ European marketing director.
“With the premium credentials of Stella Artois, the proven success of Stella Artois Cidre and the research results we have seen for Stella Artois Cidre Pear, we anticipate our new variant will give a further boost to the cider category and delight our consumers.”