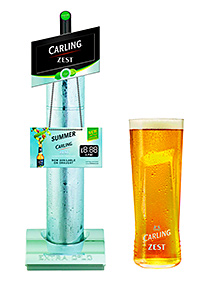 Carling Zest, a 2.8% ABV lager with a “light citrus” flavour, was launched in bottle format in the on and off-trades in March. Now it’s being rolled out on tap across the on-trade, with stockists including independent operators and national pub groups like Mitchells & Butlers.
The lager will be available to buy on draught until September.
Carling Zest-branded point-of-sale material will be available to stockists, as well as branded fonts, plaques and glassware.
Alisdair Hamilton, on-trade sales director at Molson Coors (Scotland), said Zest is an alternative to summer drinks like rosé wine and cider and appeals to both male and female drinkers.
“We’re excited to see Carling Zest flowing in pubs and bars across the UK,” he said.
“With its clear, refreshing taste and a hint of natural citrus, it’s a great choice for British drinkers who are ready to embrace the summer.”