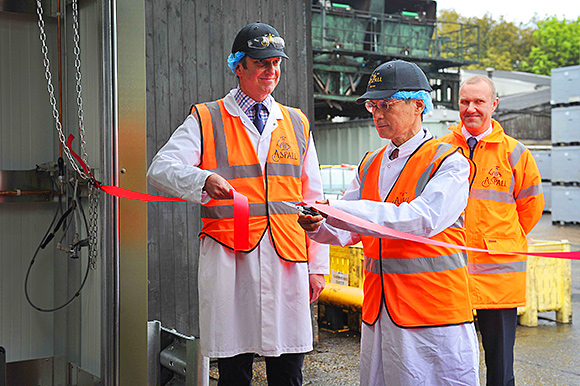 The new facility was officially opened by Ambassador Keiichi Hayashi of Japan, which is Aspall’s biggest export market. The ambassador was also given a tour of the site in Debenham, along with Tim Passmore, leader of Mid-Suffolk District Council and Dr Daniel Poulter, MP for Central Suffolk and North Ipswich.
Aspall, which first produced cider in 1728 and is now run by the eighth generation of the Chevallier family, is said to be the first producer in the country to be using plastic kegs. The Petainer PET kegs can be supplied either as complete, ready-to-fill containers or preforms and are said to bring “significant” logistical benefits for the export market as well as reducing the impact on the environment.
Barry Chevallier, chairman of Aspall, said the new kegging facility will help the producer meet growing demand from export markets after its total export business increased by 55% last year.
“The ambassador’s visit is very important to the ongoing relationship between our two markets,” he said.
“Aspall’s exports to Japan are significant, having sold 50% of the 2011 volume in the first four months of 2012.
“Based on these figures and the introduction of the new plant, we should be able to further build upon this.
“If we can continue to increase our business with Japan, it is extremely positive for both Aspall and the local economy.”
Aspall, whose ciders include Premier Cru Suffolk Cyder, Organic Suffolk Cyder, Draught Suffolk Cyder, Perronelle’s Blush, Aspall Imperial Cyder and Aspall Lady Jennifer’s, reported record results for its third quarter sales, with its total cider business up 57% year-on-year during the three months to December 31, 2011.