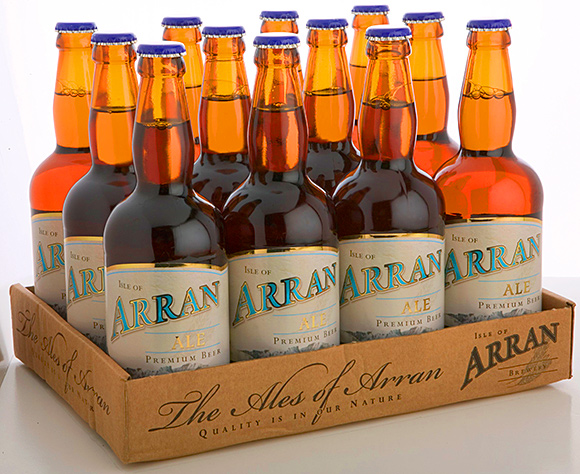 ARRAN Brewery has confirmed plans to build a new production facility and bottling hall and open a string of pubs.

The firm, owned by Gerald Michaluk, aims to fund the expansion by selling up to £10 million in shares to the public in a move inspired by Brewdog’s ‘equity for punks’ scheme.
Michaluk has identified a preferred site on Arran for the new brewery, which would trigger a ten-fold increase in production capacity, with the new bottling hall to be located on the mainland, where bottling will also be carried out for third parties.
Growing demand for the Arran beers, which include Blonde, Dark and Sunset varieties, sparked the plans.
With the existing brewery approaching the production cap in terms of qualifying for Small Breweries Relief, which grants 50% duty relief for brewers producing up to 60,000 hectolitres a year, Michaluk said any further increase in capacity had to be big enough to make economic sense.
“We can’t significantly grow beyond where we are at the moment, because any increase in production would end up being eaten by duty,” he told SLTN.
“So, if we’re to make an effort to be ‘big’, we need to a make a quantum leap, and that means a ten-fold increase in production.”
Michaluk said the amount raised by the equity scheme, which will launch in September, will ultimately determine where the new brewery is built and the number of pubs it opens. He told SLTN that “high net worth individuals” will be targeted by the share issue, with £200 the minimum investment.
Michaluk said the pubs will be tenanted, not managed, and provide an important route to market for the Arran beers.
A visitor facility will be factored into the new brewery to allow tourists and beer lovers the chance to see how the beers come to life. Michaluk, who owns Glasgow-based Marketing Management Services International, acquired Arran Brewery from administrators in 2008.