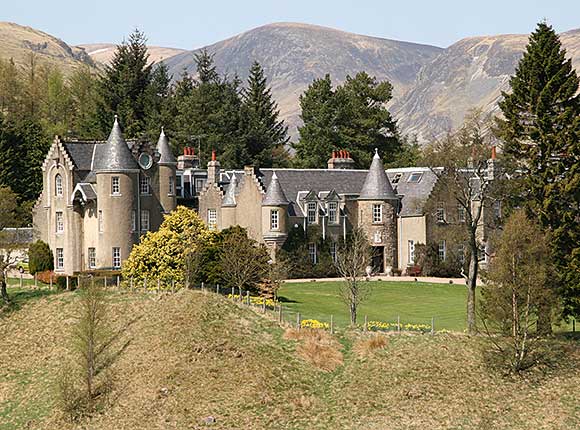 PROPERTY agent Christie & Co expects a castle hotel in Perthshire that’s just come on to its books to attract a high level of interest from potential buyers.
Dalmunzie Castle Hotel in Blairgowrie is being sold by Brianna Poole following the death of her husband Scott, with whom she operated the business for the past eight years.
Set in its own grounds in the Cairngorm National Park, adjacent to a nine-hole golf course, the baronial-style castle was originally built in 1884 and has retained many original features, including ‘candle snuffer’ turrets.
Internally, the property was refurbished by the Pooles to create a “warm and hospitable” ambience for guests.
Features include fireplaces, flagstone floors, wood panelling and traditional fabrics; the 17 bedrooms are individually styled, including the three tower rooms, which were the former Laird’s bedrooms.
Included in the sale is ‘Carriages’ – formerly the owner’s house, which was recently converted into self-catering accommodation which sleeps 13.
Christie & Co director Ken Sims said the recent sale of Dalhousie Castle Hotel & Spa near Edinburgh – a deal brokered by the agent – highlighted demand for castle-style properties.
“This is a first-class business set in an idyllic landscape which has seen sales increase year on year,” he said.
“With a two-rosette restaurant and quality accommodation, guests are royally provided for in a stunning setting. The recent sale of Dalhousie Castle Hotel & Spa by Christie & Co shows that even in a tough market there are quality buyers looking for quality businesses such as Dalmunzie.”
An asking price of £1.75 million is sought for Dalmunzie Castle.