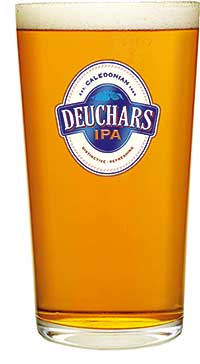 EDINBURGH-brewed Deuchars IPA emerged as the most popular IPA (India Pale Ale) in the capital in a recent survey.

Organised as part of the inaugural ’30 Days of IPA’ festival last month, the poll asked 1000 pub customers to vote for their favourite IPA in participating Edinburgh outlets, including The Bailie, Ryans and The Peartree. Consumers could also rate their top ale on the event’s website.
Tom Cannon at Edinburgh’s Caledonian Brewery said: “This is fantastic news for the brand, particularly as there’s a huge amount of competition emerging from brewers large and small, all of whom competed alongside Deuchars IPA.
“We’d like to thank the voters for rating us the number one IPA – this is a resounding vote of confidence for Deuchars IPA in its heartland and we’re delighted with the result.”
The 30 Days of IPA event took place throughout April and saw a number of events taking place in participating Edinburgh pubs.
“We’d like to congratulate Deuchars IPA on deservedly taking the top spot in our IPA poll, particularly as they were up against so many fantastic beers, including Clipper, Imperial and Raj,” said Paul Hastie from 30 Days of IPA.
“This is the first time we have held the event, so it’s an exciting time for us.
“Our overall aim was to celebrate over 300 years of IPA history, through tasting sessions, meeting brewers and generally having fun.
“We’re looking forward to next year’s event and to see if Deuchars IPA will hold onto its crown.”