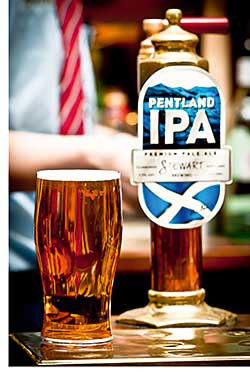 TWO Scottish microbreweries were set to lock horns yesterday (May 30) in the latest Battle of the Brewers charity fundraising event.
In the third event of its kind, organiser Edinburgh-based Stewart Brewing was pitted against Cairngorm Brewery.
Each brewery was to produce a red IPA, which were to be available in three Edinburgh pubs – Cloisters, Bow Bar and Stockbridge Tap – yesterday. The beers were labelled ‘X’ and ‘Y’, with customers at each pub asked to vote for their favourite.
Proceeds from the £5 ticket price will be donated to the Cash for Kids and Stuart Andrew Lawtie Memorial Foundation charities.
The winner of the Battle of the Brewers will be announced in the next issue of SLTN.