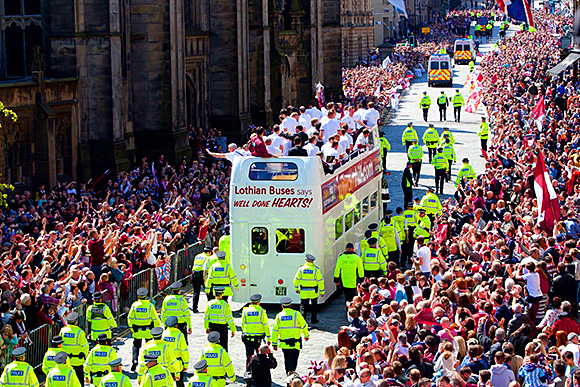 OPERATORS in Scotland’s two biggest cities are counting the benefits brought by the Scottish Cup Final clash between Hearts and Hibs after customers flocked to pubs to catch the action.

The so-called ‘super Saturday’ (May 19) saw the Jambos beat Hibernian 5-1 in the all-Edinburgh final – the first in more than 100 years – at Hampden in Glasgow, followed by the Champions League showdown between Bayern Munich and Chelsea, which the Blues won 4-3 on penalties; and rugby union’s Heineken Cup final, which saw Leinster beat Ulster 42-14.
Licensees in both Glasgow and Edinburgh told SLTN the events brought a welcome boost to trade.
Stephen Smith, manager of the Tynecastle Arms on Gorgie Road, close to Hearts’ Tynecastle stadium, said business was “non-stop” all day.
“Half my staff can hardly walk now, their feet and legs are that sore,” he told SLTN.
“But it was good. There was no bother, which is the main thing.
“I’ve no complaints, apart from the result – me being a Hibbee!”
The Globe Bar on Niddry Street, in Edinburgh’s old town, screened the Scottish Cup Final, as well as the Heineken Cup and Champions League finals.
Manager Lee Cargill said: “There was definitely a bit of a boost to the business. There was no trouble either, so all in all it was a good day.”
Pubs in Glasgow also reaped the rewards.
Clockwork Beer Company, near Hampden stadium, catered for bus-loads of Hearts fans, according to bar supervisor Shona Monaghan.
“Every single member of staff was on at some point during the day or the evening, including all the management,” she said.
“We needed it; we had hundreds of Hearts fans in here at one point, before and after the game. We got a big boost to the takings.”
Edinburgh Chamber of Commerce said the benefits of the two capital sides reaching the Scottish Cup Final were twofold for the city.
“Firstly the ‘feel good factor’ and publicity associated with the Heineken Cup and Scottish Cup success,” said MD Graham Birse.
“And secondly, the spending in local pubs, clubs and restaurants on the day of the semi-final and final.
“The city was buzzing with Scottish Cup fever and the pub trade received a multi-million pound boost to its typical weekend business.”