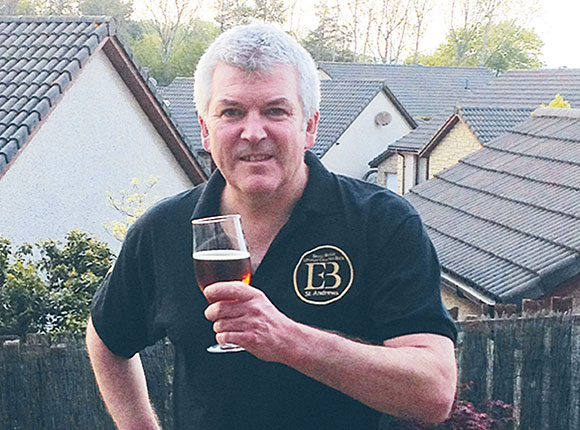 FOR the best part of a decade, he headed the Scottish sales operation of one of the world’s biggest brewers.

Now Paul Miller, the former sales director of Molson Coors in Scotland, is launching a business at the craft end of the brewing scale.
Miller is putting the finishing touches to the first major brewing development in St Andrews for more than a century, with the first brews from Eden Brewery launching into local on and off-trade outlets towards the end of June.
The first run of beers under the Eden name – a core portfolio comprising The 19th Brew (an IPA), The Clock Brew (traditional Scottish ale) and The Seggie Porter – will be brewed by Williams Bros in Alloa. But Miller hopes to be fully operational at Eden’s own brewery, in a former paper mill at Guardbridge, just outside the town, by early August.
The brewery is located in a 30-acre site owned by the University of St Andrews, and is one of a range of developments planned for the area.
Funding for the Eden venture has come from a private source and has not involved taking on debt. Miller hopes to follow the American microbrewing model and is planning to build a visitor centre and coffee shop at Guardbridge over the next 18 months to encourage people to visit the brewery.
“Apart from my kids pestering me to do this, my biggest motivation was actually Pete Coors, who, back in 2006, sat in the bar at the Old Course Hotel and asked me where the nearest brewery was, and I didn’t have a clue,” he said.
“It made me realise that this is a place that really should have one, especially given the huge growth in this sector of the market. You only need to look at Luvians wine shop and some of the bars to see the kind of beers that they’re able to sell.
“It is exciting and seeing the whole thing right through is fantastic.”
Miller has been working on product development with two consultants, Scott Williams, of Williams Bros, and Douglas Ross, and has just recruited a head brewer.
Scott Gowans, a graduate of Heriot Watt University, spent six years down south working for Adnams and Fuller, Smith & Turner and had a brief spell last year with Loch Fyne Ales. He was described by Miller as a “hugely passionate, innovative young lad with a lot of really creative ideas – exactly what I was wanting”.
Eden’s core portfolio will be available in casks, 30-litre kegs and bottles (500ml and 330ml) format, with initial stockists including the Fairmont Hotel, No 1 Golf Place, Greyfriars Hotel, Rascals Bar, Dunvegan Hotel, The Rule, West Port Bar & Kitchen, Rufflets Hotel, Macdonald Rusacks Hotel and the Criterion bar.
Local off-trade stores Balgove Larder and Luvians have also been signed up.
“The intention is to be available on draught and in packaged [format] locally, and to have packaged available for wider distribution – very much in the American model by also encouraging visitors to come to the brewery,” he added.