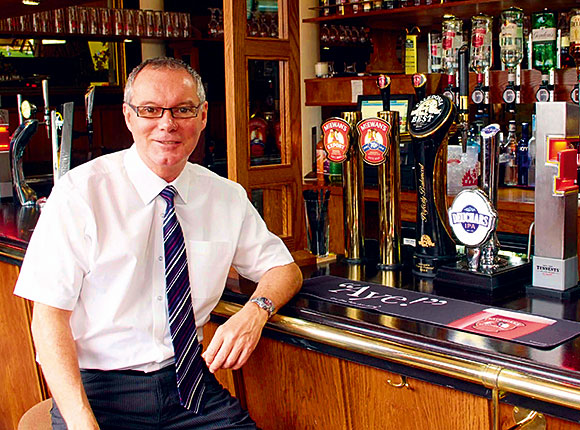 WHAT makes a great community bar in 2012?

A good place to ask would seem to be the Deoch an Dorus at Glasgow’s Partick Cross.
The bar, whose name loosely translates from Gaelic as “one for the road”, has been embraced by a mix of Partick locals and students since the current owners acquired and fully refurbished the former Hayburn Vaults in December.
Live sport (the venue has no fewer than ten 60” HD TVs and two 3D screens), music, pub quizzes, a secluded smoking courtyard and the introduction of a food offer to the bar ensured it quickly established a place in the hearts of the local community.
“Beforehand, it was what we would have termed an ‘old man’s bar’ – a wee half and half pint pub,” manager Bernie Flannery told SLTN last week.
“There weren’t many people coming in. Now we’ve got a folk band on a Friday night, another band on a Saturday and quizzes on Thursdays and Sundays, so we’re bringing a lot of the community into the bar.
“And it’s really attracting a mixed group – we have a lot of students coming in and it’s doing great. The kitchen is open to 9 o’clock on a Friday and a Saturday so there’s plenty of time to get a nice meal before.”
The art of creating a great local requires a good deal more than good food and quality entertainment, though.
An operator’s ability to foster a community atmosphere is dependent on the expertise of staff and their rapport with customers.
At the Deoch An Dorus, Bernie was able to hit the ground running as he took with him much of the same team who had worked so successfully together at two previous ventures – Gabriels in Paisley and Rhoderick Dhu in Glasgow. Bernie, who has worked in the trade for 30 years, had run both pubs for Deoch an Dorus owners Michael and Laura O’Hara; as a mark of the reputation they created, both outlets were sold to Belhaven.
Eight of the Partick pub’s personnel have been with the company for eight years, and Bernie insisted they’ve been key to the impact it’s made in the last four months.
“Everything comes down to the staff, actually – without good staff people aren’t going to come anywhere near it,” he said. “I brought the same staff from Rhoderick Dhu and we’re all fully trained and everyone is a personal licence holder. In our last pub, we won gold in the Best Bar None Awards for four years in a row.
“Without a doubt, personality behind the bar, making people feel comfortable when they come in, offering them a newspaper and talking away [are very important] – the staff are great, I must admit.”
That the Deoch An Dorus is a free house and able to stock a wide range of draught beers has only added to its appeal.
“We’ve got McEwan’s Export, McEwan’s 70/ and Deuchars IPA, as well as a lot of other products,” he said. “We’ve also got over 100 malt whiskies and that’s a big talking point when people come in.”
Chris Lewis, marketing director of Wells and Young’s, whose McEwan’s ale brand is again sponsoring the SLTN Community Pub of the Year award, stressed the importance of attracting locals to pubs.
“More than ever before there is real pressure on the leisure pound and pubs and clubs need to be at the top of their game to succeed,” he said.
“However customers have a real affinity with the best bars, many of which have been the focal point of communities for a long period of time.
“Great brands are essential to this connection with customers seeking out the familiarity which brands like McEwan’s bring to their pub experience.”