AS many as 60 of Glasgow’s best restaurants are busy raising funds to boost the educational prospects of kids in Malawi. 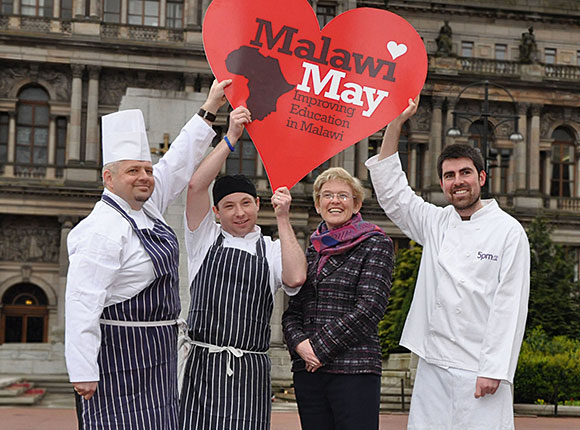 Members of the Glasgow Restaurant Association, in partnership with online booking site 5pm.co.uk, have this month been taking part in Malawi May.
The campaign is an offshoot of Malawi Leaders of Learning: Improving Education in Malawi – a collaboration between Glasgow City Council and Malawi’s South West Division to share resources and boost the learning prospects of children in the African nation.
Teachers are said to be in such short supply that some classes have 500 pupils.
Glasgow restaurants have been raising cash for the project by donating 10% of the proceeds from bookings made under the GRA’s spring Dine Around campaign, which has seen its members offer two or three course deals for £15.95 to encourage consumers to eat out in the city.
Information on the campaign has been communicated to diners on table talkers and envelopes are provided to allow people to donate more when they receive their bill.
Malawi May has also been promoted on the GRA website and through online partner 5pm.co.uk.
The GRA, which became involved on the back of its raising £70,000 in a successful campaign for Maggie’s Cancer Care Centres, was hoping to raise £12,000 from Malawi May. The money will pay for the salary, motorbike and laptop of a project manager who will work in the south west of Malawi.
Anthea Jackson, the GRA’s business development consultant, said the group was on track to hit its target.
“We’re already halfway there and have raised a substantial amount so far,” she told SLTN during the campaign.
“We do about four Glasgow Dine Arounds a year and have decided that every May we’ll chose a charity, together with 5pm, and donate part of the cover charge to charity.
“It’s a good way of getting diners to feel like they’re also helping [a good cause].
“If anyone books a Dine Around through our website or through 5pm they will know a proportion of that goes to Malawi. They will have all the information on the tables and they can add a little bit more in the envelope when they get their bill if they want to.”
One-off events were also due to be held to raise additional cash, Jackson added. On May 21, the kitchen and front of house staff at the Buttery were set to swap roles, with diners invited to pay on the basis of how much they felt the food and service were worth.
The Malawi Leaders of Learning is spearheaded by Maureen McKenna, head of education at Glasgow City Council, and Tom McDonald, head teacher at Holyrood Secondary.