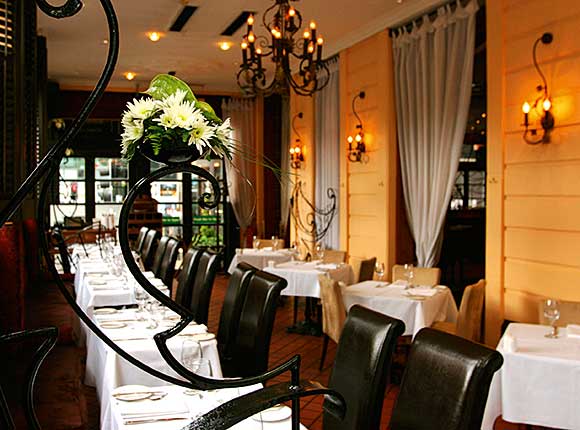 CHANGE has been a constant companion for chef Gerry Sharkey in 16 years leading the kitchen in one of Glasgow’s longest-established restaurants.
The executive chef of La Bonne Auberge has surveyed enormous flux in the city’s eating out scene over that time. 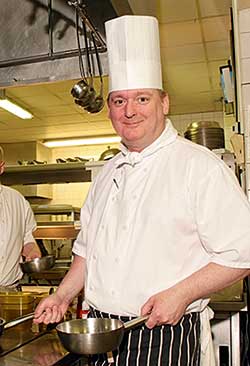 And he himself has continued to fine-tune the restaurant’s Mediterranean brasserie concept, which Maurice Taylor first launched in the mid-1970s with a restaurant in the Park Circus area of Glasgow and, later, at Parklands Country Club in Newton Mearns.
Yet for all the changes in the wider market, and in the restaurant’s own offer, La Bonne Auberge has remained true to its founding principles, offering, in Gerry’s words, “fantastic food, great service and value for money”.
“That’s what La Bonne Auberge stands for and has done for 35 years now,” he told SLTN last week.
Gerry’s appointment at La Bonne Auberge back in 1996 was the second time he had linked up with Maurice Taylor, whose Chardon Management firm runs 30 hotels across the UK, including the Holiday Inn Theatreland adjoining La Bonne Auberge in West Nile Street.
Their paths had earlier crossed when Maurice made Gerry sous chef at Parklands, which launched in 1990.
That switch was preceeded by stints in several Glasgow hotels, including the Central Hotel, the Skean Dhu (which was rebranded the Hospitality Inn and then the Thistle) and the Copthorne (now the Millennium), as well as fine dining restaurant The Triangle in the building that went on to become nightclub Archaos.

Our menu meets the needs of many different people. I’m proud of that.

The chef described his time at Parklands as a mixed experience.
“It was the worst job I’ve ever had, but it was the best job I’ve ever had, because of the pressure of having to do everything yourself,” he explained.
“I learned so much.”
“After 18 months in the south Glasgow suburb, he returned to the city’s hotel scene as senior sous chef in charge of banqueting at the Forum (now the Crowne Plaza).
The banqueting co-ordinators would come to me and say ‘we need a dinner for X amount of people, for X amount of money, for a specific product launch’, or whatever the case may be,” he said.
“Coming out of Parklands, nothing was difficult. Everything was do-able. It didn’t matter if it was for 500 people.”
After five years at the Forum, Gerry rejoined Maurice as he opened La Bonne Auberge at his Holiday Inn Theatreland hotel in the city centre.
The aim was to establish it as a restaurant in its own right, distinct from the adjoining hotel – a strategy Gerry said remains in place today.
“It’s about keeping the place busy,” he said.
“Busy places get busier, quiet places get quieter.
“I don’t want to be a fine dining destination restaurant, I want to be all things to all people. And I’m proud of that.
“Our menu meets the needs of many different types of people.
“It’s a restaurant with its own entrance.
“People think ‘there’s the restaurant, let’s go in and eat in there’. They don’t think ‘let’s go and eat in the Holiday Inn dining room’.
“It’s two separate businesses in the same building.”
In addition to his position as executive chef at La Bonne Auberge, Gerry is also a consultant for Chardon Management – a role that has seen him involved in designing kitchens for diverse hotels in the group, including Hotel Indigo in Glasgow and the Holiday Inn at Southend Airport.
Gerry said the dual role keeps him busy, which he said is part and parcel of being a professional chef.
“You’ve never really arrived,” he added.
“You think you’re consistent, but you’ve always got challenges and you need to keep striving.”