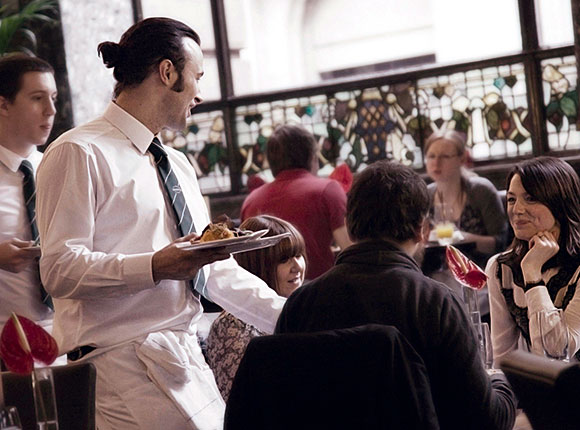 WET weather slowed sales for the operator behind the All Bar One, Browns and O’Neill’s brands in the first quarter of the year, it was reported earlier this month.

Posting its half-year results to April 7, Mitchells & Butlers, which operates 1600 bars and restaurants across the UK, said “persistent rain” led like-for-like sales to grow by just 0.2% in the 11 weeks to April 7, compared to 4.4% in the 17 weeks to January 21.
Food sales were credited with driving like-for-like sales over the half-year period, up 3.4% in the 28 weeks compared to 2.2% growth in drinks sales.
Overall, revenues in M&Bs’ ‘retained estate’, which excludes the disposal
of 333 non-core pubs in November 2010, were up 6.3% in the 28 weeks
to £969 million, with like-for-like growth of 2.7%. Pre-tax profits were down £1m to £42m.
Operating profit before exceptional items for the retained estate was up 1.5% to £138m, with net operating margin down 0.7%, which M&Bs said was a result of rising energy and food costs.
M&Bs opened 35 new venues, including its 200th Harvester outlet, and converted seven during the 28-week period.
And as part of its business transformation programme, the firm said it simplified support functions and sharpened focus on customer service over the period. The pubco upgraded its IT infrastructure, which it said had laid the foundations to roll out wi-fi and implement a quicker menu development cycle.
Looking ahead, executive chairman Bob Ivell said the company was making good progress to appoint a chief executive, following the departure of Adam Fowle last March and interim chief executive Jeremy Blood in October.
“We have remained firmly on the front foot with a relentless focus on actions that will drive the medium and long-term success of the business,” he said.
“We are continuing to deliver a resilient operating performance, maintaining the roll-out of our industry-leading brands and progressing our major business change programme.
“Despite challenging trading conditions, we remain confident that we can deliver a full-year result in line with expectations.”