The cellar management involved is a little more challenging, but the owners of the New Liston Arms haven’t looked back since going live with real ale 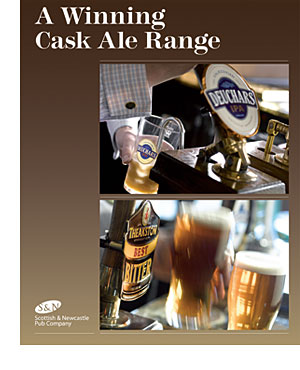 WITH cask ale requiring more cellar care than ‘regular’ draught beer, it’s thought that many operators have been deterred from adding the ‘real’ stuff to their repertoires.
And that’s before they’ve even considered whether there’s likely to be demand for the product at the pub in question.
But one West Lothian pub seems to have dispelled the notion that cask need be a difficult concept to execute.
The New Liston Arms is planning to expand its cask offer after locals began lapping up Deuchars IPA shortly after its introduction by leaseholders Sarah and David Gray.
The pub now offers three guest ales a week and the Grays are looking into how to extend that range.
For Sarah, the benefits of offering cask outweigh the level of cellar management involved.
“It’s more tricky than the normal stuff, but providing everyone knows what they’re doing and the staff have been trained then it’s not too bad,” she told SLTN last week.
“It was slow at the start, but once people knew we were doing it we couldn’t keep up. We were running out [of a cask] in one or two days.
“We’re talking about the possibility of puttng another handpump in, and possisbly two if we can find the room on the bar for them.”
The staff at the New Liston are trained by David, who completed courses in cellar management at the Caledonian Brewery in Edinburgh. Sarah said everyone on the team is now confident in changing kegs and rotating stock, though the bulk of the line cleaning is handled by herself and David.
That process place every Friday and usually takes about two hours, she said.
The Grays are tied to S&NPC for beer under the terms of their lease but Sarah said the company has plenty of choice on offer through its Britain’s Got Cask catalogue, which changes regularly.
“Certainly anything from Theakston is going down a treat,” Sarah added.