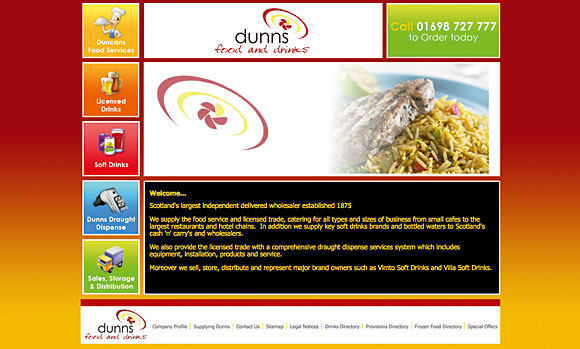 BLANTYRE-based wholesaler Dunns Food and Drinks has launched a new initiative to promote Scottish produce to bar, restaurant and hotel operators.
As part of its Scottish Roots campaign, the wholesaler has joined forces with a number of local food and drink producers, including Ramsay of Carluke, the St Andrews Farmhouse Cheese Company, Burnside Farm in the Scottish Borders and the Isle of Ewe Smokehouse, to showcase their products to Dunns’ trade customers.
Robert Pew, business development manager at Dunns, which has 100 staff and an annual turnover of £18 million, said the activity is designed to reaffirm the “variety and quality” of Scottish produce.
“Small producers in Scotland don’t have the opportunity to advertise their products in the same way a larger company can,” he said.
“Therefore they miss out on sales. But we already have a very large customer base in Scotland, so by showcasing their products, and selling their range, we can help them to grow their business.”
Dunns’ managing director Jim Rowan said the initiative will showcase everything from venison to seafood and oatcakes to ice cream to the restaurant and licensed trades.
“The recession is hard enough so it’s important to find new ways to boost the economy,” he said.
“Customers want and deserve quality at the very best price, and that’s what’s on offer.
“I’m not only confident that this is going to take off, but I’m enthusiastic that this new venture could create jobs for all concerned.
“Our customers are telling us how important ‘locally sourced’ is on their menus and we anticipate Scottish Roots will prove popular with chefs and restaurateurs alike.”