THE official beer for Euro 2012 is backing the tournament to be a money-spinner for pubs – after the windfall brought by the World Cup in South Africa in 2010.

According to Carlsberg UK, the last World Cup generated £59.9 million in extra profit for the UK on-trade, which included a 30% increase in average spend per person. 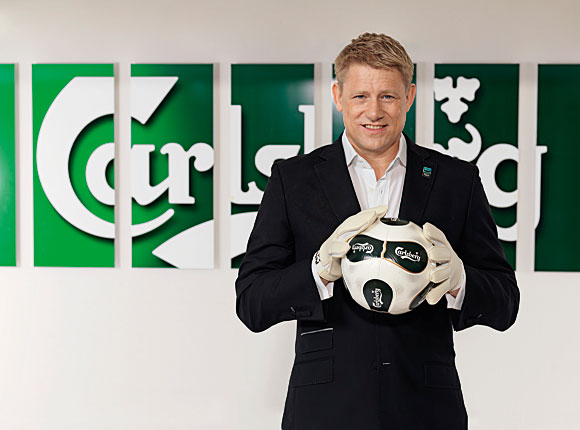 And the firm’s director of marketing is tipping next month’s tournament in Poland and the Ukraine to be the most lucrative opportunity for pubs around the UK this summer.
“During major football tournaments pubs have the potential of creating an atmosphere like no other place,” said David Scott. “Over three weeks, 31 matches will be televised and with the matches held in the evening, UK time, there is a huge opportunity for pubs to get customers in early and keep them after the match.
“Pubs must start promoting now to make sure their pub is the place to go and Carlsberg has a wide range of POS available via www.carlsbergwedelivermore.co.uk.”
Carlsberg and other brewers are issuing customers with advice to help them make the most of the event.
While he conceded major football tournaments “now tend to be off-premise led drinking occasions”, Molson Coors’ Alisdair Hamilton said there are steps the trade can take “to keep people drinking in the pubs and bars” during the games.
“Firstly, ensure you have enough TVs and a good enough audio system to ensure everyone can enjoy the games without straining to hear or see.
“Having an A-board or poster advertising the upcoming matches outside helps pull in passing trade.
“Having food on offer can be a great way to keep customers longer and spending more. Given that the pub is likely to be busy, you should consider a simple menu that can be prepared quickly and at low cost.”
Tennent Caledonian Breweries also said there’s merit in taking a simple approach to promoting games.
“Let them [consumers] know when the matches are and which ones a you will be showing,” said sales boss John Gilligan. “Themed food or a simple offer of sandwiches or a pie for the match are always a winner for football fans, as is the chance to win prizes for predicting match result or first goal scorer.”
One of the biggest challenges operators are likely to face during Euro 2012 is ensuring product quality and service are up to scratch and again the brewers say there are ways to prepare
As well as making sure bars have enough staff and stock for when the big crowds descend, Carlsberg’s Scott said operators should consider the following:
• round pound deals
• bucket promotions
• dedicated beer lanes
• separate bottle bars
• temporary exterior and interior service stations
• table service and pint carriers
• pre-paid vouchers.
Meanwhile, Belhaven brewing and brands boss Euan Venters does not expect Scotland’s failure to qualify to undermine the opportunity for pubs.
“Football-loving fans across the country will still be looking for great venues to watch all the action in and there really is no substitute for the special atmosphere a great pub can offer,” he said.