Watching big events in bars is next best thing to being there, firm says

THE standard of audio/visual entertainment in pubs has improved dramatically in recent years, giving customers an increasing sense of the atmosphere at live sporting occasions.
So for those not lucky enough to be at the European Championships in Poland and Ukraine, or the Olympics in London, taking in the action at the local pub is the next best thing.
That’s the view of Craig Straton, account manager at Sims Automatics, who said operators who invest in the latest TV technology can profit when the ‘summer of sport’ gets underway next month, when the Euros kick off on June 8. 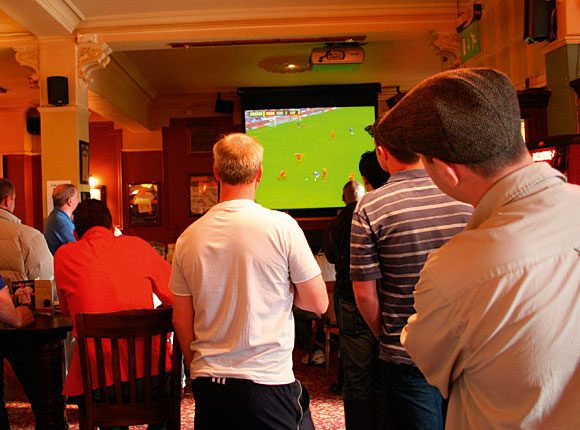 According to Straton, the technology available for showing live sport in pubs has “come on leaps and bounds in the past few years”. And while he concedes screens will never be able to fully capture the drama of attending a live event, the right technology can still create a “buzz of activity” in the on-trade.
“In just a few short years live sport in pubs has gone from a small television set in the corner of the room to a major point of difference for a large number of pubs,” he said.
“We at Sims Automatics are finding that this summer, due to various factors, we are looking forward to a whole buzz of activity within the pub sector on the sports entertainment front. Although Scotland will not be represented at the Euros I think our society is so mixed these days that we are catering to all markets and reaping the rewards.”
“The summer time can be a quieter time for the pub sector, which looks towards the football season to boost trade. But not only do we have the added advantage of the Euros this year we also have the Olympics.”
The choice available to pubs has never been so great when it comes to screens, with options ranging from smaller, 21” lcd screens to 9-foot LED projector screens.
Straton said 42” and 50” plasma screens tend to be the most popular in the trade, with 3D technology becoming increasingly sought after.
“The 3D option has proven popular within a lot of venues and is definitely something to try out if you have two or three screens,” he said.
“It would be something special to see Usain Bolt charging out a screen towards you.
“With the quality of sound and vision on offer it is surely the next best thing on offer without stepping on a plane.”
Current technology also means that screens are available for beer gardens and other outdoor areas, though Straton admitted that “with our climate being as it is it is still a market that is a little untested in Scotland”.
Aside from screening live sports events, Straton also highlighted the value of high-quality screens for providing details of upcoming entertainment events and fixtures.