WEST, the fast-growing brewer based on Glasgow Green, is bidding to shake things up on the standard lager scene.

The business, headed by Petra Wetzel, is launching a new 4% ABV lager as an alternative to brands like Tennent’s, Carling and Beck’s Vier.
West 4 is the latest in a portfolio of beers, made according to Germany’s ancient beer purity laws, which are gaining traction in the Scottish trade and around the world.
Wetzel said the new lager “pretty much does what it says on the tin”, and had partly been conceived in response to the perception that all German-style beers are strong.
The Brunswick Hotel in Glasgow’s Merchant City was the first to stock the lager, which Wetzel confirmed has been listed by “all the big distributors and direct from us”.
“Everything that West has ever done has been demand-led, rather than us pushing a product on to people,” she told SLTN.
“That’s why being a small, nimble business and able to respond quite quickly to consumer demand makes us a really strong proposition on the market.
“When people told us they wanted a real ‘session’ product, which to me means something with a low enough ABV to drink one or two pints more than a premium lager, what we came up with is a ‘premium session lager’ – a beer with all the quality of our St Mungo, our Munich Red our Hefweizen, that was truly drinkable.
“It was very much because our big customers said they wanted an alternative to the big boy brands, like Beck’s Vier, Carling and Tennent’s.” 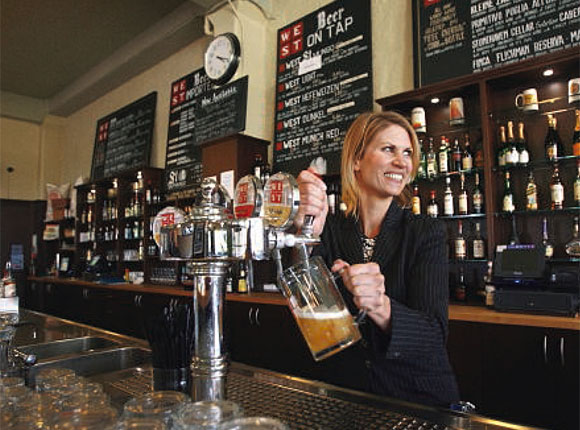 West’s St Mungo brand is now sold in London and Italy as well as around Scotland and Wetzel is hoping to export to America.
West currently brews alongside its bar and restaurant in the former Templeton Carpet Factory, but with demand outstripping its ability to supply, Wetzel is using a brewer in Germany to produce its brands under licence until its new brewery in Glasgow is built.
Wetzel was unable to confirm the exact location but said it was north of the city centre. The deal has yet to be concluded and talks are ongoing with the relevant authorities, but it’s hoped work on the new brewery will begin in August or September.
“It’s a very exciting time for West – we’ve just sold our first container to Italy and I’m going to America on Sunday because we’ve had some enquiries from New York and Boston,” she told SLTN.
“People in the United States have heard of St Mungo lager and I think that’s partly to do with being the house lager at Turnberry.
“When Tom Watson, Mark Calcavecchia and all these famous golfers came to play the Open at Turnberry, they all drank St Mungo and they’re still talking about it.
“Mark Calcavecchia owns an importing business in Florida and he always said if we ever appointed an importer in the States he’d like to sell it down there.
“So as we look outside Scotland, we see that what we have created as a Scottish brand is actually quite powerful. A lot of people said a German-style lager brewed in Scotland wouldn’t work, but I think it’s the best of both worlds.”