A HAMILTON publican is embarking on a career in politics after winning a seat in the Scottish local elections earlier this month.

Lynn Adams, who runs the George bar with husband Colin, took one of three seats available in South Lanarkshire Council’s Hamilton North and East ward for the SNP. David McLachlan and Monica Lennon returned the other two seats for Labour.
Labour won the most seats across South Lanarkshire – 33 compared to the SNP’s 28 – and according to the local press was set to strike a deal with three Conservative councillors and one Lib Dem to retain overall control.
Adams, an active trade lobbyist for the SLTA, said it felt “surreal” to have won her seat but was looking forward to juggling the dual roles of publican and elected representative.
And she told SLTN it was her standing as a passionate campaigner for town centre improvement that’s likely to have persuaded voters to have given her their support.
“I’ve lived and worked in the town for 20 years,” she said. “I’ve campaigned for various things, I’ve worked with various groups to try and make things better for the town – not just within the licensed trade.
“I am known, plus I’m the only councillor that lives in
the ward I stood in – a local person standing in their own ward was also likely to have an effect.”
As for her immediate goals, Adams said she was eager to meet her constituents to find out the issues concerning them most, and hopes her long experience as a publican will be an asset.
“The immediate priority is to find my feet and my way about,” she said. “Then I’d like to get involved with town centre issues and things like that, which I’ve done for years anyway.”
Adams can continue her association with the SLTA, she is a past president of its Strathclyde branch, but said she would have to declare it as an interest and as such not serve on any council committees that overlapped the trade.
“The only conflict might be time!” she said.
As for the George, the new councillor said her husband Colin would handle much of the running but she would continue to be “the face” of the bar. 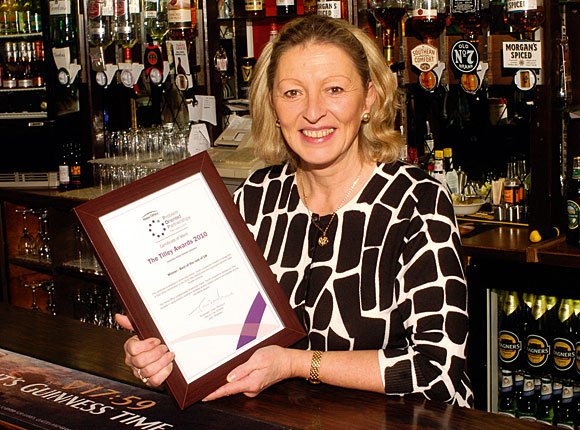